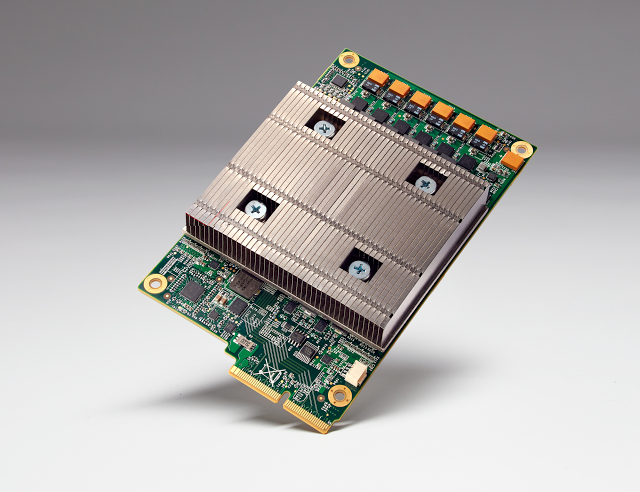 There have been plenty of announcements coming out of Google I/O this week, and yesterday, Google said that one of its projects that was created years ago is helping it accomplish its own custom accelerators for machine learning applications.

The result of that project is called a Tensor Processing Unit (TPU), which is a custom ASIC that was built by Google just for machine learning. TPUs run inside Google data centers and have been for more than a year, according to a Google blog post by Norm Jouppi, a hardware engineer at Google. The company found that TPUs deliver better-optimized performance per watt for machine learning.

The chip requires fewer transistors per operation, meaning Google can squeeze more operations per second into the silicon, according to Jouppi. A board with a TPU fits into a hard disk drive slot in Google’s data center racks as well.

Google’s goal is to lead the industry in machine learning and have it available for customers. TPUs in the infrastructure can give developers more possibilities across software like TensorFlow and Cloud Machine Learning.

Apprenda acquires Kismatic
Apprenda now offers a commercial distribution of Kubernetes and new enterprise support subscriptions that are available to any company running Kubernetes. The new offerings are made possible because of Apprenda’s acquisition of Kismatic, the enterprise Kubernetes company.

With this acquisition, Apprenda hopes to power the transition to cloud-native applications and to allow developers to build their software quickly and more reliably. Also with the acquisition, Patrick Reilly, CEO and founder of Kismatic and governing board member of the Cloud Native Computing Foundation, will become Apprenda’s corporate CTO and lead its strategy with Kubernetes.

Kismatic will continue to expand by supporting subscriptions that provide Kubernetes users with guaranteed SLAs for production and nonproduction Kubernetes instances, and it will offer professional services that help customers extend their cloud strategies, according to a company announcement. Kismatic also contributed to the open-source dashboard for Kubernetes.

Apache Software Foundation founder joins Linux Foundation
The Linux Foundation is getting a new member who will lead as executive director of the Hyperledger Project, an effort to establish, build and sustain an open platform for the enterprise.

The Hyperledger Project’s goal is to create common distributed ledger technology that is transparent, so it becomes an application that can benefit those in finance and other areas like banking, insurance, or the Internet of Things.

SourceForge scans all projects for malware
As of today, SourceForge will display a warning badge next to the download button of any project that has been flagged for containing malware detected by SourceForge malware scans.

SourceForge said that its definition of malware includes adware, viruses, and any unwanted applications that could potentially be included in the software package of any SourceForge project.

SourceForge has also partnered with Bitdefender to scan open-source software projects on SourceForge, so its users can feel secure when downloading software. This also protects the machines, and additional scans will be running with ESET, according to a SourceForge blog post.

New projects that are uploaded to SourceForge from new user accounts will not be accepted if they are flagged with a Bitdefender or ESET scan upon uploading. Those who are already registered can upload their projects, but they will be flagged if malware is detected, and a warning will be displayed.

Pepper has emotion-recognition artificial intelligence, so developers can use this with their own code as part of next-generation computational platform development.

Developers can also download the beta version of the Pepper SDK for Android Studio so they can access tools and training to create new content and uses for Pepper. In the developer portal, there will be SBRA-led workshops and training, where users can directly access software and resources to work with Pepper. Forums on the portal give developers access to the engineers of Pepper to learn how else they can advance the technology.

Back in 2012, there was a LinkedIn breach, and the company never clarified how many users were affected, wrote Motherboard. This hacker, who calls himself Peace, told Motherboard that the data was stolen during this breach, and at the time there were only 6.5 million encrypted passwords affected.

Peace is selling this data on an illegal Web marketplace called TheRealDeal for five bitcoin (US$2,200). Peace and another data search engine that claims to have the data (named Leaked Source) said that there are 167 million accounts hacked in the database.

“Yesterday, we became aware of an additional set of data that had just been released that claims to be e-mail and hashed password combinations of more than 100 million LinkedIn members from that same theft in 2012,“ the company’s chief information security officer Cory Scott wrote in a blog post. “We are taking immediate steps to invalidate the passwords of the accounts impacted, and we will contact those members to reset their passwords. We have no indication that this is as a result of a new security breach.“

Programming challenge with AI bots
“Four legendary heroes were fighting for the land of Vindinium, making their way in the dangerous woods, slashing goblins and stealing gold mines, and looking for a tavern where to drink their gold.”

For those programmers that love a good game, Vindinium is an artificial intelligence programming challenge that is looking for challengers. Users can take control of a hero using the programming language of their choice, then fight with other AIs for a predetermined amount of turns. The hero with the most gold will win.

Programmers can create their bots and register their AI on the server. Starter packs implement a bot that can move in a random direction on each turn, and Vindinium takes care of the HTTP and JSON parsing so users can focus on game logic.