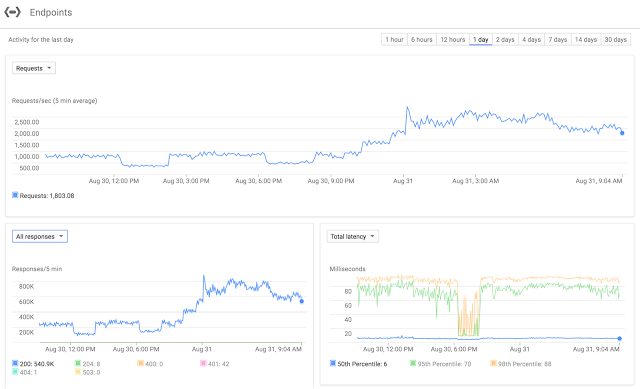 Google has announced the open beta release of a new set of features that will help developers manage their APIs with Google Cloud Endpoints, an API-management suite that runs on the Google Cloud Platform.

The Google Cloud Endpoints suite lets developers deploy, protect and monitor APIs written in any language. Besides the Endpoints suite, Google also announced new versions of Cloud Endpoints Frameworks for Java and Python. Both are beta releases and will make it easier for developers to create a web back end for web or mobile clients for Android, the company said.

The new versions of the Java and Python frameworks include an improved developer experience and support for custom domains. The frameworks allow developers to opt into the new API management features as well.

According to Dan Ciruli, product manager for Google Cloud Platform, the challenges that Google faced when building an API platform at Google led the team to develop the Extensible Service Proxy (ESP). ESP is a server-side NGINX-based proxy that performs traditional API-management functions itself, and it was designed to be deployed in a container environment or standalone.

Google is releasing this architecture to developers so that they can scale their web APIs. Developers can integrate ESP with Google Service Control, which provides low-latency monitoring and API validation, along with a few other features, said Ciruli.

In addition to the new architecture available to developers, Google is announcing support for the OpenAPI Specification. Since Google is a member of the Open API Initiative (OAI), he said that the company “recognizes the value of standardizing how REST APIs are described,” and Google wants other organizations to benefit from OAI tooling.

The API-management features in Cloud Endpoints are currently in beta, so they are offered at no charge. Final pricing will be announced at the end of the beta period. Ciruli said developers should be on the lookout for new releases from the Endpoints team, including additional support for more use cases and functionality, developer portals, and more.