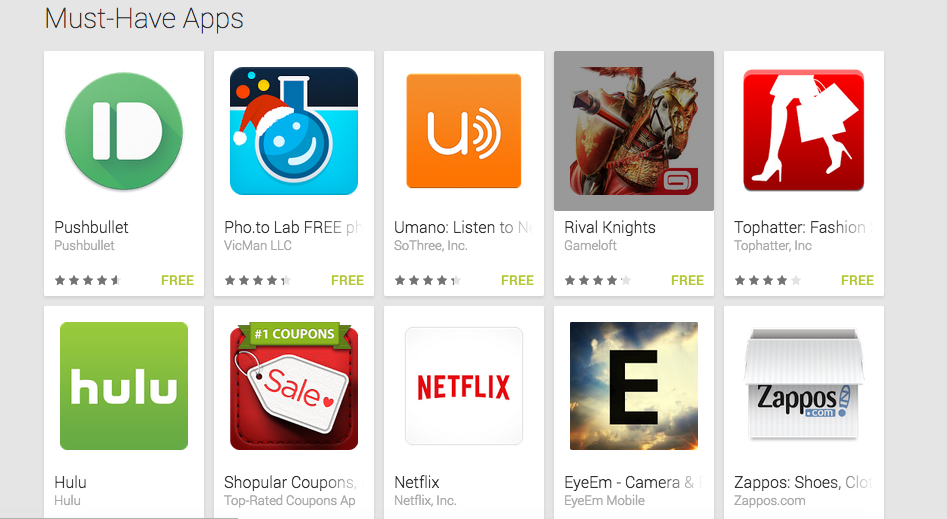 Google released a list of its must-have Android apps, rattling off 127 of the most highly recommended and highest rated apps in the Google Play Store. The apps, most of them free, range from popular favorites including Netflix, Shazam and Spotify to mobile applications with fast-growing user bases such as Quip, Pushbullet and Lumosity. Google’s full list of Must-Have Android Apps in the Google Play Store is available here.

Inspired by the ML and Haskell languages, Ur features a richer type system based on row types, as well as Ur/Web, a compiler and library for parsing and optimization. Ur and Ur/Web bring HTML, CSS, SQL, XML and JavaScript development within one language, compiled to machine executable code to simplify the development process. Not only do Ur-developed Web pages and programs not crash during particular page generations, according to Chlipala, but the language also prevents common problems such as code-injection attacks, invalid HTML returns, dead intra-application links, HTML form and field mismatches and invalid SQL queries.

“The signature of the standard library is such that well-typed Ur/Web programs “don’t go wrong” in a very broad sense,” Chlipala wrote on the Ur website.

Chlipala will present the Ur web development language at the Association for Computer Machinery’s Symposium on Principles of Programming Languages in January.

The leaked documents detail efforts by the NSA as well as British intelligence agencies to break various encryption schemes, as well as to cover up the inefficiency of encryption programs such as that of video chat application Skype. A cache of data known as the “sustained Skype collection” was accessed by the NSA under the guise of a seemingly secure Skype encryption. Other services perceived as secure but that in reality are monitored by the NSA include a large number of VPN and HTTPS connections, along with the SSL/TLS encryption protocols exposed as vulnerable through the Heartbleed breach.

The report also reveals the encryption programs and schemes the NSA has the most trouble attempting to crack. According to the documents published by Der Spiegel, the NSA had “major” issues breaking encryption on the Tor encrypted network, Zoho encrypted email service, the now-shut down Truecrypt service, the Off-the-Record instant message encryption tool and the Pretty Good Privacy (PGP) tool.