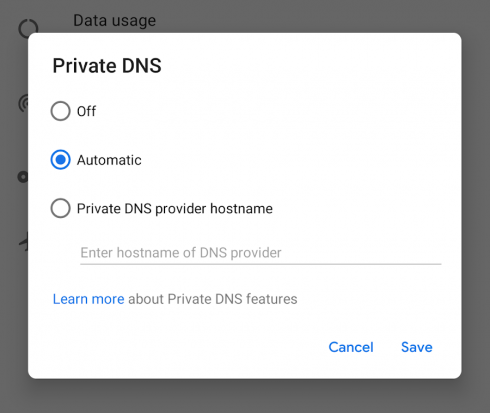 Google has announced that the developer preview for Android P will include built-in support for DNS over TLS. DNS over TLS is a new DNS protocol the Internet Engineering Task Force created to provide the latest protections for security and privacy. It uses the TLS protocol to create a secure connection to the server and once that happens, DNS queries and responses are unable to be read or changed by anyone monitoring the channel, the company explained.

According to Google, this feature will automatically be used on a device if the network’s DNS server supports it. It can also be turned off in settings by users who do not wish to use it.

It also allows for the locking of files so that only certain people have access. It supports a command-line interface as well as some third-party GUIs, in addition to the ability to script in Python, Perl, Ruby, or Java. Some of the updates in version 1.10.0 include bug fixes, better path-based authorization, new interactive conflict resolver, LZ4 compression support, and shelving.

“Dealing with merge conflicts is one of the most complicated aspects of version control. While merge conflicts in a text file are usually best resolved by editing the file directly, merge conflicts can also occur when the directory tree structure of a project is changed. Resolving such structural conflicts requires users to manipulate entire collections of files and directories at once, which is time-consuming and error-prone,” said Stefan Sperling, vice president of Apache Subversion. “With Subversion 1.10, structural conflicts can now be resolved with support from a built-in interactive conflict resolver which automates conflict resolution tasks users had to perform manually in the past. This is a major usability improvement and saves users who do a lot of merging a significant amount of time.”

ReactOS 0.4.8 is released
The ReactOS team has announced the release of its operating system, ReactOS 0.4.8. According to the company, improving the user interface was a major focus for this release. It rewrote the taskbar setting and dialogs so that auto-hide, toggle lock, and always on top options are fully functional. Several bugs in the notification area were also fixed, and now balloon notifications are supported.

The notification tray will now also remove the icons of killed and finished processes. With this update, users will be able to select multiple desktop icons.

Other user interface improvements include deletion and renaming of files, shell autocompletion, the ability to dismount network drives from the explorer, and Eject and Disconnect menu items.

In addition to the user interface, this release expands software support to NT6+, improves kernel stability, and improves compatibility with hardware.