Stack Overflow: Angular and Swift are dramatically rising in popularity 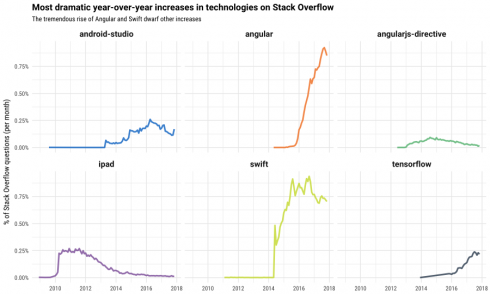 Stack Overflow is taking a look at the most dramatic rises and falls in developer technologies. According to its data, Apple’s programming language for iOS development, Swift, and Google’s web framework Angular are getting a lot of attention from developers today.

“Life as a developer (or data scientist, in my case) involves being comfortable with changing technologies,” Julia Silge, data scientist at Stack Overflow, wrote in a post. “I don’t use the same programming languages that I did at the beginning of my career and I fully expect to be using different technologies several years from now. Both of these technologies grew incredibly fast to have a big impact because they were natural next steps for existing developer communities.”

The data is based off of Stack Overflow “questions by” tag.

Technologies that have had a decrease in interest within the developer community include JavaScript framework Backbone.js, game engine Cocos2d, Microsoft’s Silverlight, and Flash framework Flex.

Stack Overflow also looked at technologies with the highest sustained growth since 2010. The report found Angular.js, TypeScript, Xamarin, Meteor, Pandas, Elasticsearch, Unity 3D, machine learning, AWS and dataframe have grown at a high level over the past couple of years.

“Several of these technologies are connected to the growth of data science and machine learning, including Pandas and the dataframe tag,” wrote Silge. “Others occupy unique positions in the software industry, such as the ubiquitous search engine Elasticsearch and the game engine Unity. These technologies are diverse, but they all have grown at strong and steady rates over the past 5 to 7 years.”