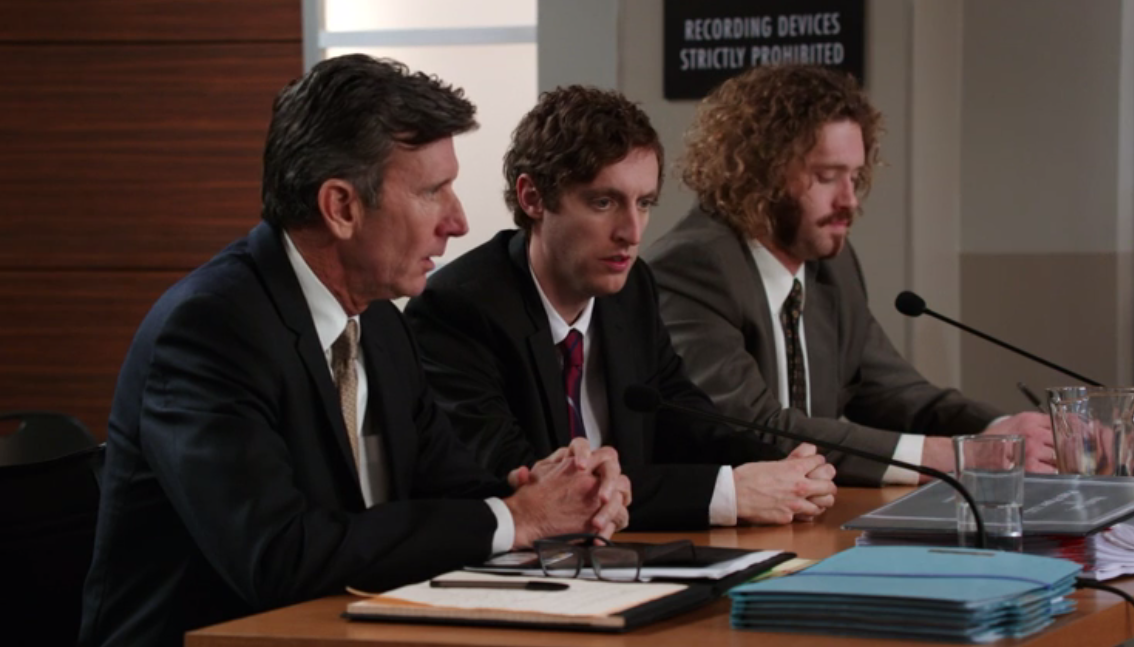 Only on “Silicon Valley” would an intellectual property case hinge on lawyers figuring out that when Richard is talking about his “girlfriend” in e-mails, he’s referring to his laptop.

In a conveniently timed twist, Richard—who’s always maintained he never worked on Pied Piper at Hooli—realizes that for a three-day period while his “girlfriend” was in the shop, he ran one test on the Pied Piper algorithm on a Hooli computer. This revelation happens to come the night before he’s set to testify in a binding arbitration hearing to settle the intellectual property case once and for all.

(Last week on “Silicon Valley”: A hack attack from within)

This episode was the first time since early in the season the show truly dissected the lawsuit at the core of season two. It takes a new character in disbarred lawyer Pete Monahan (Matt McCoy), a mountain of discovery documents, and a stray Nucleus beta phone to finally address the case hanging over “Silicon Valley’s” sophomore slump.

Monahan—fresh out of an 11-month jail stint after a drug-fueled bender worthy of “Fear and Loathing in Las Vegas”—is working the case pro bono because technically a disbarred lawyer can still litigate an arbitration hearing.

Since Hooli never cracked Richard’s middle-out compression algorithm, the mobile beta of Nucleus is a disastrous joke. Big Head finds a Nucleus beta phone left in a bar by the depressed Hooli brogrammers pulling their hair out over the project, and he decides his buddy Richard needs a win. Out of funding and on the brink of a failed startup, Richard and his lawyer blackmail Gavin Belson and Hooli’s lawyers into the binding arbitration. Otherwise “The tech blogs and journalists would tear Nucleus apart,” Richard meekly threatens.

At the trial, Hooli’s lawyers invoke their weak argument about Big Head’s meteoric rise within the company proving how crucial he was to the inception of Pied Piper. Monahan counters by cross-examining Erlich about his poor business judgment and failed incubator to show just how little Big Head really brings to the table, frazzling Erlich enough for him to let slip about Richard’s “girlfriend” spending a few days in the shop.

Finally confronting the question of intellectual property head-on, Richard doesn’t lie on the stand because “If his company was built on lies, it would make it just like Hooli.”

“I just wanted to be different,” said Richard. “The law says I lose everything I worked for because I used one Hooli computer to test and modify one block. Is that right? Is that fair? To me if the system says that’s fair, I guess I’m not meant to be a part of it.”

The episode ends before the arbitrator gives his decision, but given the real-world fallout of court decisions in the Google v. Oracle Java API copyright case, “Silicon Valley” has a chance in the season finale to weigh in on this exact issue. Is software copyrightable? Just because an algorithm was developed or tested on a tech company’s machine, does that make it theirs?

“Silicon Valley” largely abandoned further development of Pied Piper’s startup growth or continued technological innovation to focus on this lawsuit. If the show caps off this season with a statement on software intellectual property that really matters, it’ll be worth it.