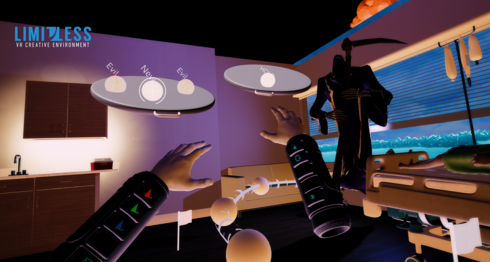 In years past at the Game Developers Conference in San Francisco, VR has been the thing of secret behind-closed-doors demos, and long lines for the peons. It was enough to have the hardware and a single demo to show it off, and you’d have lines around the booth.

But this year, VR is just another platform among the many that developers must consider when building a new application. Between mobile devices, consoles, handhelds and desktops, the marketplace is as vibrant as ever, and the blunt realities of the business have led to something of dearth of content for various VR platforms. Put succinctly: There is no killer app.

While VR is by no means an understood concept from an interface perspective, the devices have nonetheless shipped and are thus driving sales. Developers are now able to see what’s working thanks to user feedback. In fact, many of the VR developers at GDC cited application discovery as the single greatest advantage of being in the space.

Fewer competitors means that the VR games market is almost the exact opposite of the mobile market in every way. That is to say, it’s small. Fewer games, fewer buyers, fewer developers, and fewer noise to be heard over. That, however, is a recipe for small returns on big risks, something most companies wish to avoid.

Such was the case for the team behind VR Invaders, a game developed by Russian game company My.com. Instead of betting big on VR, My.com’s development team formed and built their game a year ago in an agile fashion. Now that it’s been in the market for a full year, however, they’ve updated it for free to version 2.0, which implements advice from its player base.

This is a somewhat different course for game development houses, which typically spend years working on a single project and then leave it for the next game as soon as it ships. Instead, when it comes to VR, the small size of the current hardware footprint in the marketplace seems to reward developers who release something simple and grow it through community feedback.

Elsewhere in the VR scene, the pipeline is still hampering developer progress. Ikrima Elhassan, cofounder of VR game developer Kite and Lightning, said that building 3D art for VR is a painful process that requires slow handoffs between his company’s 3D art tools, the Unreal Engine, and the physical gear used to play the game. Because the process requires pouring art into the 3D engine and then outputting a new binary just to check if it works at all, development within the VR market can be a slow process reminiscent of the days when builds took hours.

One company trying to solve this is Limitless, which offers artists and directors an in-VR animation and scene development kit. Users can position animation points, set pieces, and actions all from within the VR space they’re creating. This means that when a set piece is added to a room, the user immediately sees what it looks like in VR, rather than having to go through a build and test process.

Limitless was founded by former Pixar employee Tom Sanocki. Pixar focuses heavily on storytelling, and that’s exactly what Sanocki said he hoped to enable with Limitless. He said that his tool allowed a team to build a 10-minute interactive VR story in four months, a significantly shorter period than using traditional tools.

What works and what doesn’t
While that will definitely help developers get their experiences to market faster, it remains to be seen if that market is truly worthwhile. Sony’s Playstation VR system has been selling well, said the company, but other companies’ VR offerings aren’t flying off the shelves.

There are some clear reasons for this, however. First of all, Playstation VR simply works with a Playstation 4, and requires no extra hardware. Oculus Rift and the HTC Vive both require a fairly burly PC with modern hardware inside, raising the barrier to entry far above the US$600 to $800 price-tag for the goggles alone.

Another sticking point is that the Xbox One’s own VR offering, tied to the Oculus Rift headset, requires users to buy a brand new Xbox One console; the original cannot be used with the Oculus Rift.

Still, VR manufacturers are not deterred. Rikard Steiber, president of Viveport and senior vice president of virtual reality at HTC, believes the real path to growth involves more outreach to consumers. This is likely to involve VR arcades, he said. Such VR shops would provide users with a pay-by-the-hour VR experience, and Viveport will even offer rental options and commercial licenses for software to foster these parlors.

This is because, he said, when the public gets its hands on VR, it’s always exciting and popular. The big trick is getting people to try it out for the first time. He said that prices for headsets and equipment will certainly fall over time, but right now, the challenge is a market education problem.

For VR developers (according to Damon Hernandez, 3D web and immersive technology developer for Samsung), mobile devices and WebVR are the platforms of the future for VR developers. He cited the ease of distribution and forthcoming support by major software players as the draw to WebVR.

“If you’re a developer and you want to make money,” said Hernandez, “go for what everybody already has. The writing is on the wall: Facebook is having WebVR talks, Google is going [in] that direction, Samsung is going in that direction. The Web is the platform for content delivery. This year, is it worth it to ship a product on that? No, but it will be stable this year, and if you want to release in Q1, Q2 or Q3 of 2018, start looking at it now.”