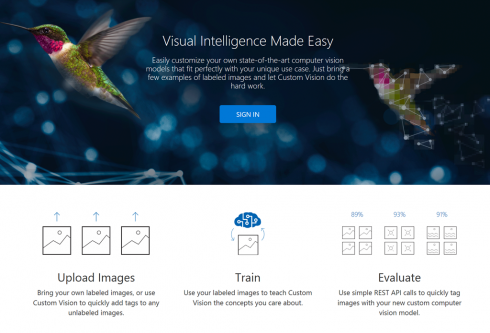 “For years, Microsoft researchers have been pushing the boundaries of computer vision, making systems able to more accurately identify images. The following milestones represent one of the many examples of how we’re integrating our research advances into our enterprise services,” Joseph Sirosh, corporate vice president of AI and research at Microsoft, wrote in a post.

As part of new milestones, the company announced the public preview of the Custom Vision service on the Azure Portal. The service enables developers to train classifiers with their own data, export models, and embed them in applications. They can then be run offline in real time on iOS, Android, and other edge devices.

According to Microsoft, one of the applications for this service is retailers creating models that can auto-classify images from their catalogs. It can also be used to allow social sites to better filter and classify images.

The Custom Vision Service can also export models to the CoreML format on iOS 11 and the TensorFlow format on Android.

In addition, the company announced several new improvements to its Face API. The Face API is a cloud-based service that provides face and emotion recognition. By analyzing a users’ emotions, it can provide that user with a more personalized user experience.

One of the new features to Face API includes million-scale recognition, which provides a new face list with up to a million faces, allowing developers to teach the Face API to recognize up to 1 million people.

Microsoft also announced that Bing Entity Search is now generally available on the Azure Portal. This will allow developers to identify the most relative result based on search teams and provide primary details about those results.