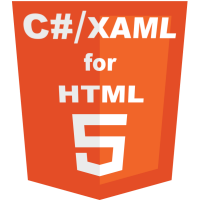 The free Visual Studio extension that allows developers to build HTML5 applications using C# or XAML has hit beta version 8 on its way to general availability. C#/XAML for HTML5 (CSHTML5) was developed by the software company Userware. Beta 8 includes more than 25 features requested by users, such as extensibility, styles and templates, and C#/JavaScript interoperability.

“[CSHTML5] is the only extension that lets developers migrate their Silverlight apps to HTML5 without changing much of their code,” said Giovanni Albani, CEO of Userware. In addition, the extension allows developers to create enterprise-grade Web and mobile apps in C#/XAML without having any JavaScript knowledge, he added.

One of the biggest features of the latest release is the ability to use third-party components and add-ons to extend CSHTML5’s functionality, according to Albani. Extensions include WebSockets, Print, File Open Dialog, File Save, Mapping Control, ZIP Compression and more. Developers also have the option to create their own extensions. Any extensions submitted to the company before June 15 using CSHTML5’s Professional Edition will be entered to win a free Professional Edition perpetual license and one year of free updates.

Developers can also go beyond C# and XAML with the new ability to write native JavaScript code and access existing JavaScript libraries. “For example, when migrating Silverlight apps that use third-party components, developers can replace those third-party component with similar JavaScript-based libraries,” Albani said. “Other extensions exist that compile C# to JavaScript—such as Bridge.NET, Saltarelle and SharpKit—but none of those support the XAML language to build the user interface.”

CSHTML5 is expected to be released from beta in August or September of 2016.

Developers can expect the next version to include expanded support for Silverlight and WPF features such as ChildWindow, animations, implicit styles, improved compilation performance, enhanced Chart controls, and improved WCF.

“For the last couple of years, we have been steadily releasing major new versions every eight to 12 weeks, and we will continue to do so in the foreseeable future,” said Albani.