TIOBE Index: Interest in the C programming language is plummeting 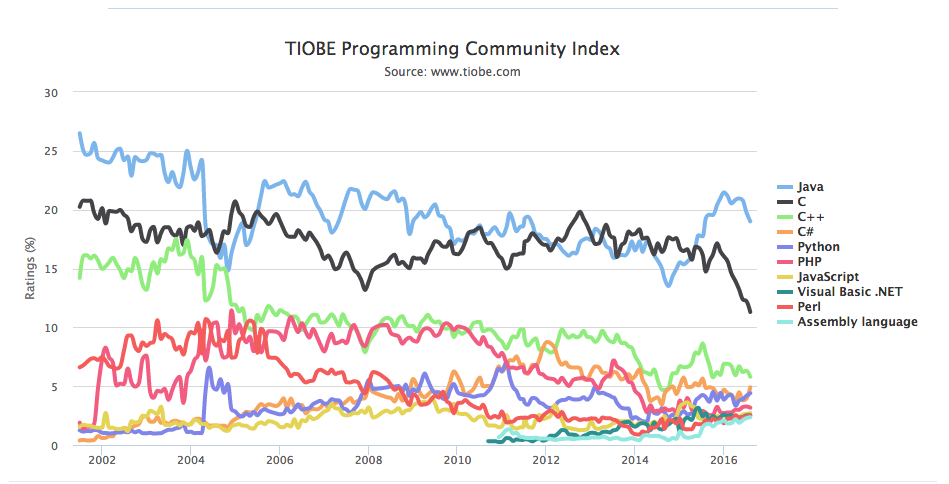 The C programming language is struggling to compete with other languages in today’s fast-paced web and mobile world. The language hit an all-time low on the TIOBE index this month.

“The C programming language has a score of 11.303%, which is its lowest score ever since we started the TIOBE index back in 2001,” the index stated.

The TIOBE Index tracks the interest in programming languages. According to TIOBE, the fall of C is due to the increase of mobile and web application development. C isn’t as suitable as other programming languages are for mobile and web development, and it doesn’t evolve like other languages. “There is a ‘new’ C11 standard available, but this contains only minor changes. The constraint that C object code should remain small and fast doesn’t help here,” the index stated.

(Related: TIOBE calls Java its language of the year)

While C still remains the second most-popular programming language on the index, it’s expected to go further down the list. “[The] story of computer science is that of a constant march toward higher abstraction, and so languages like C and C++, which are very close to the machine, will give way over time to those higher up the stack,” said Al Hilwa, program director for IDC. “Abstraction translates to being able to produce more code functionality per hour of development and working in a more sandboxed and managed runtime that reduces errors and improves quality of code.”

In addition, the index notes C doesn’t have any major companies backing the language. For instance, Oracle supports Java; Google also supports Java as well as Dart, Go, JavaScript and Python; Apple promotes Swift and Objective-C; and Microsoft has an interest in TypeScript, C++ and C#.

“Java continues to be popular in part because of the influx of new mobile Android developers into the language. I expect Swift and JavaScript to continue to gain over time,” said Hilwa. “I also see C# mounting a comeback after all the open-source activity from Microsoft.”

Other key findings of the index included an increased interest in JavaScript, PHP, R, Ruby and Swift, as well as a decrease in MATLAB, Objective-C and Visual Basic.