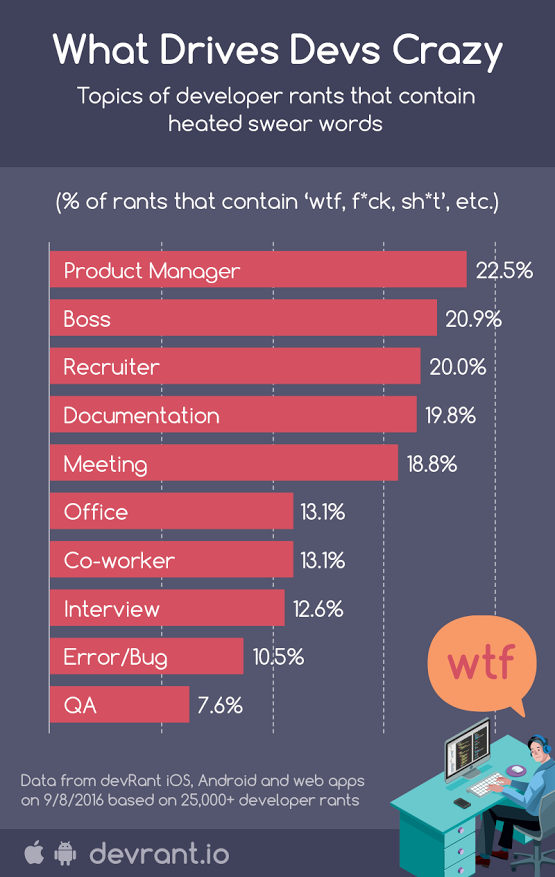 Since developer-friendly mobile app devRant’s launch in March, it’s had more than 15,000 developers post more than 25,000 rants about what really gets them riled up. devRant has collected this data and looked into what specifically ticks off developers, factoring in the occurrence of heated swear words that come up with each rant topic.

Developers can use devRant to share jokes, coding memes, recent mid-life crises, and of course the occasional curse word (or two). It’s also a platform where technology leaders, coders and programmers can bond over their successes and frustrations, said cofounder Tim Rogus.

According to him, the devRant team started looking at the most commonly ranted-about topics in all of the rants posted by developers. In order to get the true emotional tone associated with each, they factored in how many times swear words (including “wtf,” “fml,” etc.) came up with each topic.

“What we found was that rants about product managers/project managers showed the highest concentration of heated words, where 22.5% of posts about PMs contained a heated word,” said Rogus.

Recruiters only fared slightly better at 20%. Surprisingly, said Rogus, errors and bugs appeared to produce much less irritation, with only 10.5% of rants including heated words. This is compared to half the rage directed towards PMs, bosses and documentation.

With all these rants, devRant has created a cartoon series based off of users’ biggest grievances. Here is one about commit messages: