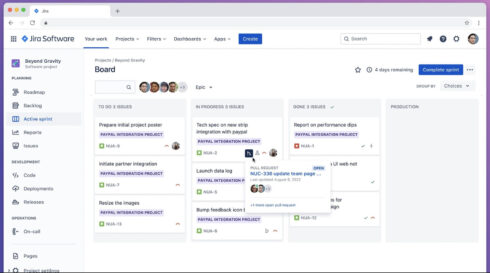 Open DevOps was designed to help organizations deal with the ever-growing number of tools their teams use by bringing into a central location that allows them to use the tools they want, and then feed the actions from those tools into Jira, Atlassian’s project management solution.

“We see that those teams on average are using 25 different tools inside their software development tool chain. And what this really means is that they are struggling with tool sprawl. And they’re spending a lot of time, some estimates are 10% of their development team time, just like creating and maintaining this tool chain,” Suzie Prince, head of product for the DevOps organization at Atlassian, told SD Times in an interview. “And one of the knee-jerk reactions to combat that is to lock their teams in place with a single all-in-one solution, which can be rigid and create these kinds of one-dimensional cultures. We really see that the best teams create their own tool chains, they use the best-of-breed tools that are right for them. We want to provide visibility, remove the challenges, but not limit teams in their approach. And so we take a different approach to that, which balances flexibility with structure, autonomy with alignment.”

Open DevOps integrates Atlassian’s own tools with the third-party tools teams prefer to use for their tasks. An admin page within Open DevOps lets organizations discover, visualize and connect tool chains – both Atlassian and third-party tools – to get the single view of visibility into projects and insights into how work is going. These capabilities are specifically available to Atlassian’s cloud products, Prince said, though on-premises tools such as GitLab Enterprise can be connected in.

Prince explained there are five specific areas that the new features deliver on. The first is automation, which can be leveraged across the life cycle to remove the burden of communication from developers. “An example of that would be if a developer is moving a piece of code, they’re merging it back into their mainline, we can update Jira Software when that has happened. The developer doesn’t need to go from their source control back into Jira Software, we can automate those updates and provide that kind of communication and visibility to other team members.”

The second area is around issue insights. According to Prince, if different teams in an organization are using different code repositories, such as Bitbucket, GitLab, or GitHub, that can all be pulled into a single code view. And with that information across the tools, Atlassian can provide insights to teams as they’re planning their work. “So for example, if I know how long it usually takes my developers to code and deliver something, when more scope gets added into a sprint, in Jira Software, I can provide insights and translate those to real-time impact. So can  warn teams, ‘Hey, you’re gonna miss your project deadlines because you just added more scope.’ And I know based on your previous behavior that that takes a certain amount of time. So we call those scope creep insights. We can provide information about scope creep and warn teams if they’re about to fall into that trap.We can also share information about blockers. So is a particular issue taking a very long time?”

Further, Atlassian announced a new release tab that allows teams to coordinate release management. By pulling information from source control management tools, CI/CD and feature flags, software teams can see what’s needed to deliver unreleased software. “This is really important,” Prince said, “because we recognize that software development is a multidisciplinary craft. It’s not just developers, there are marketers, there are designers. And so by bringing all of this information into Jira Software, all of those personas and crafts get visibility across the life cycle.”

After code is released into production, a developer hub called Compass, announced in April at Atlassian’s user conference and still in beta today, provides insights into the health of the software through a process inside Compass called CheckOps.  “Is it reliable? Is it performant? Has it broken its SLAs recently,” Prince asked. She described CheckOps as like a retrospective to look at components in production to assess their health.

Finally, the fifth area involves dark mode, which Prince said will be coming “in the new year.” This, Atlassian said in its announcement, allows software teams to work in comfort and ship features feeling more relaxed.