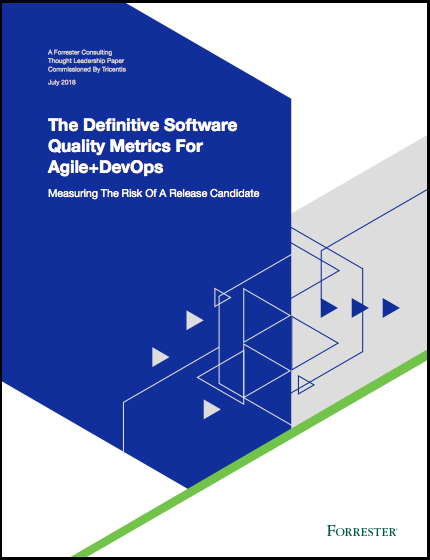 A newly released report found that there are five practices that elevate the most successful DevOps initiatives above others. Forrester released the findings of its Tricentis-commissioned “The Definitive Software Quality Metrics For Agile+DevOps: Measuring The Risk Of A Release Candidate” report earlier this week

“For firms that follow these five best practices, testing is a way to gain speed and efficiency, rather than a bottleneck to delivering faster,” the company wrote in the report.

The survey looked at responses from 603 enterprise Agile and/or DevOps specialists from all over the world and focused on evaluating where companies’ priorities lie in the development cycle and by what metrics they measure Agile and DevOps success.

Also among the core results of the survey, Forrester found that automation can cripple user experience when not enough emphasis is placed on measuring software quality in the first place.

“Firms must understand the business risk — the chance of a negative user experience — that each software application carries when deciding whether to release,” the company wrote. “Unfortunately, most firms today admit they have gaps in their ability to accurately assess and manage business risk in testing.”

The last highlighted result of the report noted that the most effective DevOps leaders “ruthlessly” push for end-to-end test automation.

“With a better indication of risk from their testing metrics, DevOps leaders can relentlessly pursue automation to develop with quality at speed,” the company wrote. “They do this by prioritizing end-to-end automated business process test cases. They automate test design and test execution, and they orchestrate the automation of the overall dev-test-deploy process.”