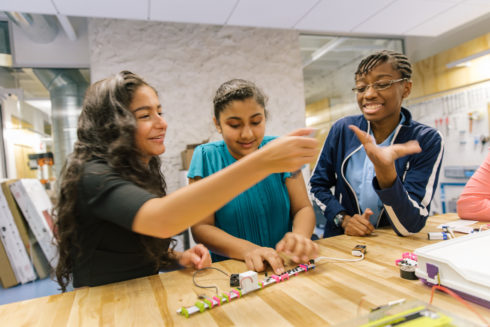 IBM is committing its resources to positively impact the tech industry. Recently, it announced a community grant that would be awarded quarterly to nonprofits that are “dedicated to education, inclusiveness, and skill-building for women, underrepresented minorities, and underserved communities.”

Today, it was announced that Girls Who Code would be the first recipient of the $50,000 community grant. Half of the grant will be awarded in cash and the other half in cloud credits.

Girls Who Code is a group that provides after-school classes and summer courses in computer science to teenage girls. In addition to gaining technical skills, the program also empowers girls.

According to Girls Who Code, the biggest drop off in computer science participation for girls happens between ages 13 and 17.

Since the organization started in 2012, it has served over 185,000 girls, 50% of whom were from historically underrepresented groups. It has also indirectly served 100 million girls, the organization explained.

“This grant will help close the gender gap in tech, and bring in new minds with new ideas,” said Reshma Saujani, founder and CEO of Girls Who Code. “Gender equity is so important to our industry and it’s wonderful to work with IBM to achieve that.”

According to IBM, other finalists in the grant competition this quarter includes Outreachy and PyLadies. Outreachy sets up three-month paid internships on open-source projects, and PyLadies is a mentorship group that helps women become active in the Python open-source community.