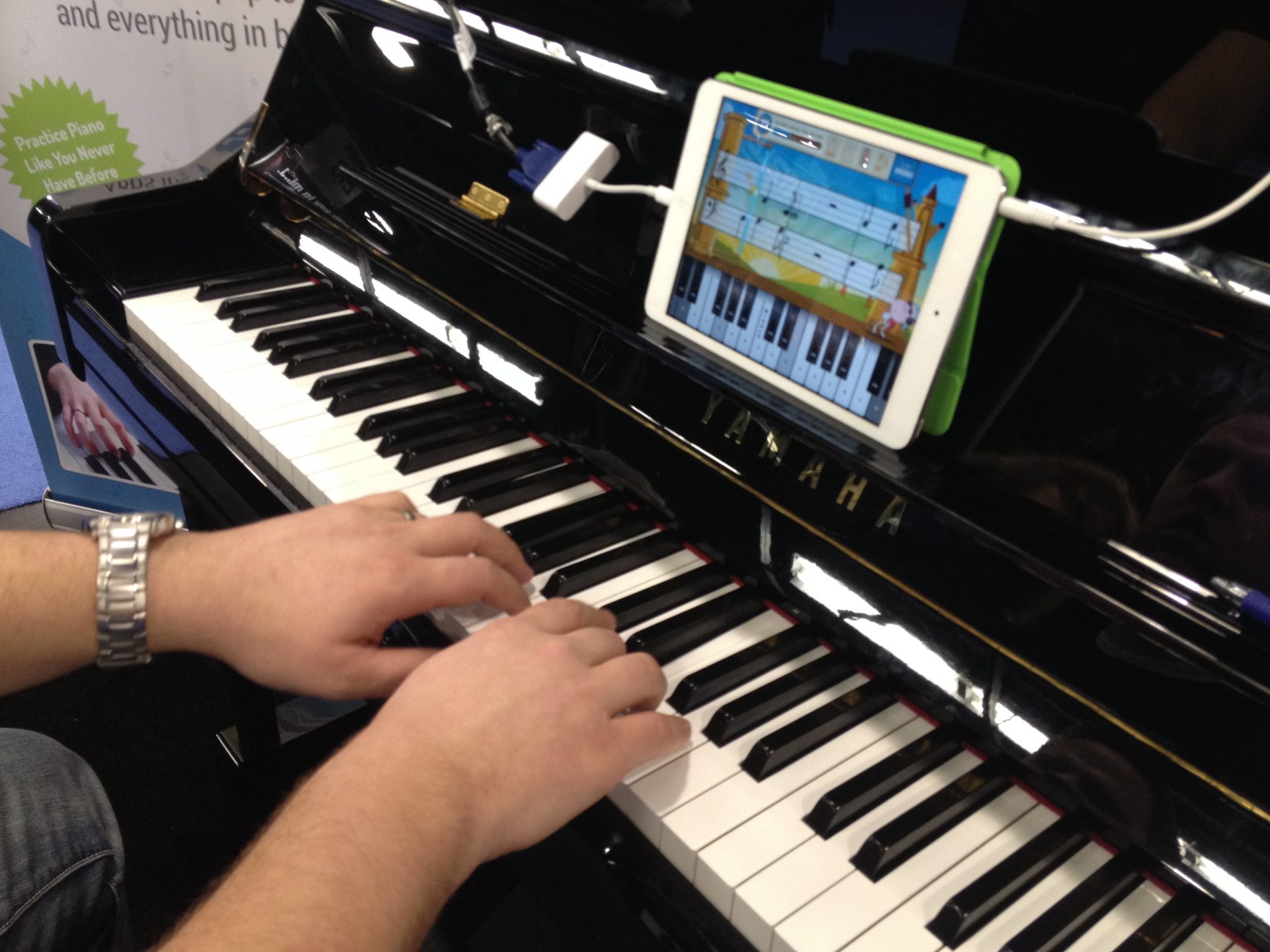 Forget what you’ve heard about the music business. While it may be hard to feed a family of four on gigs, the market for musical gear and education is exploding. In 2014, new instruments and apps for learning how to play them are taking advantage of software and embedded technology. Take the fantastical circular keyboard called PianoArc.

The donut-shaped keyboard is big enough for two grown men to stand inside it, back to back, and play simultaneously. It is enabled by an optical key detection system called PNOscan, the latest from QRS, a 114-year-old American company that once supplied music rolls to the player piano market.

The instrument is likely just a novelty for touring acts like Lady Gaga (or so it advertises). For music teachers, new ways of integrating computers and acoustic instruments abound. Piano Marvel can run on a touch-screen tablet or laptop sitting on a piano’s music stand. Music notation scrolls by on a white background as you play the piano.

“This is music education software. Most people use a laptop plugged into their electronic keyboard,” said Joel Shifflet, product manager at Piano Marvel. Pairing Piano Marvel with an acoustic instrument requires retrofitting the piano with PNOscan optical sensors so that a MIDI (musical instrument digital interface) cable can send the note output to a computer.

The system itself, however, marks one example of a growing number of apps designed to add “gamification” and “badgification” goodies to music education software. The advantage of Piano Marvel is that advanced students can track the accuracy of their sight-reading without any signal processing latency. They can also post scores to a cloud server and keep their teachers informed on progress. Students earn trophies and keep them in a virtual case. No sound effects or bright Guitar Hero-like flashes are to be found.

“We looked at adding more gamification aspects, but we found them distracting to students,” Shifflet said.

Make it fun and it gets done
But as a glance at mobile app stores will show you, gamification is in full force. PianoMaestro was launched in 2013 (as Piano Mania), one of a family of three iOS music education apps by the Israeli startup. Another, Piano Dust Buster, uses the same falling notes metaphor that Guitar Hero made famous, itself building on the dopamine-inducing effect of fitting falling Tetris blocks together.

“JoyTunes was inspired by two main research directions,” said Yigal Kaminka, musical director and cofounder of JoyTunes. “First, the extensive research around the benefits of gamificationin education in general. Second was a big survey conducted in the U.S. in 2010 showing that nearly 85% of those who start learning to play a musical instrument quit during the first one to two years. At this time, gamification in music education was still very new and undeveloped, and it was clear to us that in order to combat these terrible figures we would have to develop and use gamification as a pedagogical tool.”