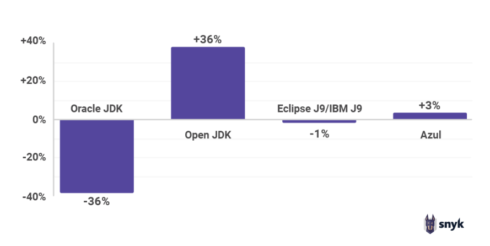 In 2019, Oracle made a decision that shook up the Java community. The company changed their licensing model so that only those with a paid commercial subscription plan would receive updates to Java SE.

While some companies using Java have stuck with Oracle and dealt with increased support costs, many are jumping ship.

According to a new survey by Azul Systems, 80% of Oracle JDK users are currently considering other options. Oracle JDK users previously made up a large percentage of Java users, according to a 2018 survey jointly commissioned by Snyk and Oracle. That survey found that 70% of respondents used Oracle JDK, 21% used OpenJDK, and 9% used other JDK implementations like Eclipse OpenJ9/IBM J9, Android SDK, and Azul.

With 80% of that 70% of users now considering alternatives, there is a huge gap in the market for those alternative implementations to take hold.

According to Azul Systems, a more recent survey from February 2020 showed that preferred use of Oracle JDK had dropped from 70% to 32%. The 2020 version of Snyk and Oracle’s survey showed similar results.

The 2020 JVM Ecosystem report also found that 86% of respondents weren’t paying for Java support. Seven percent said they would be willing to pay for support based on release cadence changes, and 19% would consider that possibility.