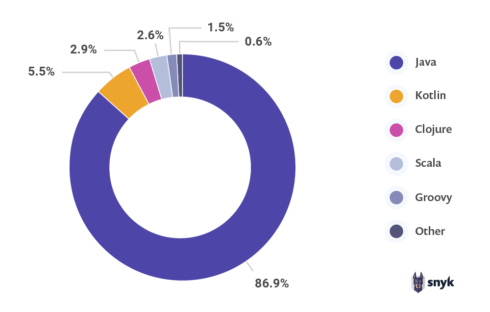 Kotlin continues to grow in popularity among Java developers, a new report from Snyk revealed. In its annual JVM ecosystem report it found that Kotlin is now the second most popular JVM language.

Java still holds a large majority, with 86.9% of developers saying they use it as their main programming language for building JVM applications, compared to 5.5% with Kotlin. Kotlin overcame both Scala and Clojure to obtain the number two spot, which were at 2.6% and 2.9%, respectively.

Snyk isn’t surprised by the surge in Kotlin adoption, due to how seamlessly it integrates with Java. In addition, the company explained that adoption of Kotlin in frameworks, such as Spring Boot, makes it easier to build production-grade systems.

The report also noted that Kotlin is influencing Java. Population innovations in Kotlin often find themselves flowing back into Java, Snyk explained. “Newer Java versions try to integrate concepts that are popular and loved in languages like Kotlin. It is interesting to see how this influences the future adoption of different JVM languages,” Snyk wrote in a post.

Of those 13% that don’t use Java as their main language, a majority of them (70%) still use Java in some capacity. Only 4% responded saying they don’t use Java at all when building JVM applications.

Another thing that Snyk looked at was the impact of Java modules. The module system was something that was introduced in Java 9.

Another interesting finding from the report is that Java 8, which was released in 2014, is the most popular version of Java, by a significant proportion. Sixty-four percent of developers are still using Java 8 and 25% are using Java 11. All other versions of Java had less than 5% usage.

Fifty-one percent of those still on Java 8 explained that their setup is working just fine, and so they don’t feel the need to change it. Other reasons for staying put include high migration costs (32%), the inability to get the business to agree to migration (30%), and that there are no features from later versions that are needed (27%).

In addition, Snyk found that 36% of developers switched from Oracle JDK to an OpenJDK distribution in the past year. Only 34% of developers are currently using Oracle JDK, compared to 70% last year.

The survey results were based on the responses of more than 2,000 developers in the second half of 2019.