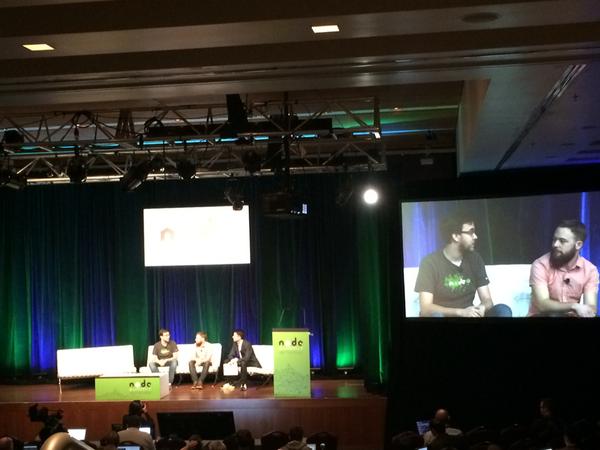 It’s been an interesting path to success for Node.js. Since its first release in 2009, the Node community has been quite vocal about anything and everything. Most recently, the community was murmuring about Joyent’s handling of the open-source, cross platform server-side JavaScript runtime for building networked applications. And calls for the dispensation of Node.js’ assets from Joyent to the community had begun.

At Node Summit in San Francisco on Tuesday, Joyent announced that it would begin creating a Node.js Foundation. This new foundation will take ownership of the trademark for Node.js, and will inherit the entirety of Joyent’s Node directory on GitHub. This directory is where the code for the core Node.js runtime resides.

The move brought cheers from the audience at Node Summit, and Node.js project lead TJ Fontaine said that there is still a lot to figure out about the foundation.

“The rules are still being created. I definitely will be participating in the technical steering committee,” he said. He added that there will be many committees driven by the new foundation, and that they will require both business participants and developer participants.

Joe McCann, CEO and cofounder of enterprise Node training and tools company NodeSource, felt that Joyent’s move to relinquish control will give the Node.js community what it has been after.

“There’s a very strong community aspect that has existed around Node, and that is finally being embraced,” he said. “Frankly, it’s a great signal to enterprise players that want to start incorporating and integrating Node into their stacks. Node is now a true first-class technology solution.”

It doesn’t hurt that Node offers some interesting and useful benefits over other server-side technologies, said Fontaine. “What makes Node compelling is that on the one hand you have JavaScript—which is the lingua franca of the Web—being able to write it for the front end and being able to write it on the back end is very compelling. It adds ease of production for that mechanism,” he said.

“The other thing we sometimes forget is that most applications are not hot on CPU. They are often waiting for network I/O, or disk, or database. It’s not really on CPU all that much, which means we can have a high concurrency for a single process. That’s a very compelling model for doing large scale on small footprints.”