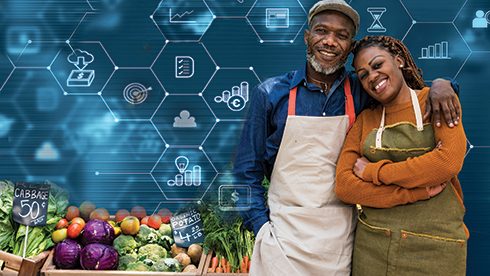 The typical family-owned business tends not to be known for its software development prowess. Instead, it tends to be known for serving a specific customer need such as manufacturing embroidered patches or distributing food supplies.

Such are the core competencies of embroidered patch manufacturer A-B Emblem and food service distributor Flanagan Foodservice. Both companies are using low-code/no-code tools to modernize their businesses.

Flanagan Foodservice wants flexibility
Flanagan Foodservice is the largest family-owned company in Canada. It distributes food items to restaurants, hotels, institutions and care homes in Ontario. Flanagan used the WaveMaker low-code platform to develop an ecommerce application that replaces what it had built previously using the Oracle platform. Oracle remains the go-to database, but the company wanted a solution that enables application development in the browser that’s deployed to the browser.

“In some cases, what you see is not what you get. We were also trying to decouple ourselves from certain homogeneous-type environments so we could connect to multiple back-end databases,” said Jerry Braga, senior programmer analyst at Flanagan Foodservice.

Had Oracle offered the capabilities it does today, Flanagan might have kept its application development on the Oracle platform rather than moving to lowcode. At the time, the Flanagan development team felt constrained by Oracle’s capabilities and wanted greater flexibility moving forward.

“Every application needs its own business logic that has to be integrated into it, but for a pure front-facing thing, [low-code] was the quickest way to give us the most current type of user experience without having to do a lot of plumbing,” said Braga.

The development team lacked significant experience with Angular, CSS and HTML, but according to Braga they didn’t need it. Using the low-code platform they were able to take advantage of those technologies without having to learn them first. Interestingly, the more they used the low-code platform, the better they understood the underlying technologies. Braga said another attractive benefit was the ability to build an application once and deploy it to different devices including tablets and phones.

Developers are still needed to code the minor percentage of functionality that the low-code platform does not provide. Of the 10 people Flanagan has in IT, three are developers.

“Later, if we want to move the database platform to another vendor, then we’ll revisit how we replace the things that are being called directly in the database,” said Braga. For now, Flanagan’s development team is content with the low-code application’s performance, availability and scalability.

Management by spreadsheets is an unwieldy process. Yet, some organizations still do it. One of them used to be A-B Emblem, which produces embroidered patches for NASA, Boy Scouts, Girl Scouts and thousands of other organizations. A-B Emblem used the Kintone low-code/no-code platform to create its own supply chain management system and to digitize some of its businesses processes.

“Even with my degree in computer IT, I was not familiar with low-code,” said Johnson. “I helped our purchasing manager with a very specific problem. That’s how I became introduced to the low-code/no-code movement.”

A self-professed “software junkie,” Johnson had a habit of downloading software that she tried to break. Eventually, she stumbled upon the low-code/no-code platform, which she tried on a trial basis. Within the 30-day trial period, she was able to build the supply chain solution. The solution was implemented after signing the contract with the low-code/no-code vendor. Johnson later trained A-B Emblem suppliers on its use.

Now, Johnson is in the process of building a custom low-code ERP solution. Since a formal IT function no longer exists in the company, application developers tend to be citizen developers.

Both A-B Emblem and Flanagan Foodservice have required the assistance of their respective low-code/nocode vendors to meet their goals since neither company has significant in-house developer resources. Flanagan needs help coding what can’t be done with the platform; A-B Emblem needs application development experience it lacks. Johnson said A-B Emblem’s vendor has helped expand the scope of low-code/no-code use cases. For example, the Microsoft Excel-based order system was replaced with a custom low-code application.

“Our entire quoting system was in Excel forms originally with a sick amount of DBA code. It was a beast,” said Johnson. “When we started putting things in [the low-code/no-code platform] we found that we had all these extra check points because we didn’t trust the system we’d built [in Excel]. Instead of having thousands of rows in one database, [we had] thousands of databases in one row, which is ludicrous and they weren’t even connected.”

A-B Emblem maintains very little stock on-hand because most customer orders are very small one-time orders that can be unprofitable. The low-code approach has enabled the company to adopt a Vista Print-type ordering model in which customers can upload designs and order as many patches as they need.

Within the company, low-code/no-code development has enabled the rapid implementation of application features and enhancements. According to Johnson, most requests can be handled on the spot in a matter of minutes as opposed to days or weeks.

The business process improvements enabled by low-code mean fewer humans are required to do the same amount of work. However, as a family-owned business, A-B Emblem may be more sensitive to the personal impact of change on its employees, so it has made a point of moving the displaced workers into new roles.

“One of the things I’m adamant about is not to forget the people element of this,” said Johnson.