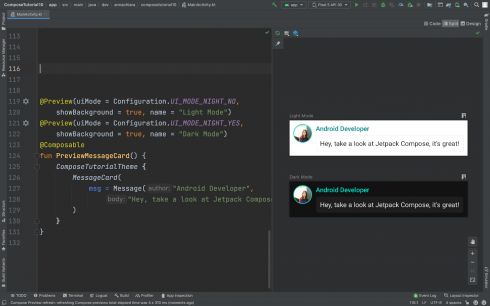 According to the team, Compose has been developed in the open for the past two years with participation from the Android community. As of this 1.0 release, there are already 2000 apps in the Play Store that have utilized Compose.

“We designed Compose to make it faster and easier to build native Android apps. With a fully declarative approach, you just describe your UI, and Compose takes care of the rest. As app state changes, your UI automatically updates, making it a lot simpler to build UI quickly. Intuitive Kotlin APIs help you build beautiful apps with way less code, and native access to all existing Android code means you can adopt at your own pace. Powerful layout APIs and code-driven UI make it easy to support different form factors, like tablets and foldables, and Compose support is coming for WearOS, Homescreen Widgets, and more,” Anna-Chiara Bellini, product manager at Google, and Nick Butcher, developer relations at Google, wrote in a post.

Jetpack Compose is designed to be interoperable with existing apps, integrate with Jetpack libraries, and offer Material Design components. It’s Lazy components provide a simple and powerful way to display lists of data without requiring much boilerplate code, the team explained. Compose also has a selection of animation APIs to make it easier to build animations into Android apps.

This 1.0 release introduces Compose Preview, available in Android Studio Arctic Fox, which allows developers to see their Composables in different states, light and dark themes, or different font scalings. This makes component development easier since developers don’t have to deploy a whole app to a device to see what those changes look like.

Another new addition is Deploy Preview, which allows developers to test parts of the UI without having to navigate to that part of the app.

The Jetpack Compose team also unveiled its roadmap for the future of the toolkit. Going forward the team will be focusing on performance, Material You components, large screen improvements, homescreen widgets, and Wear OS support.