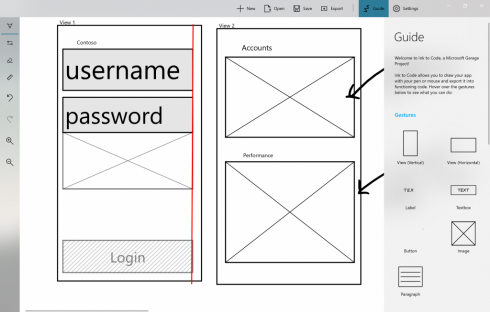 Microsoft has announced a new project, Ink to Code, which takes wire frame sketches and imports them into Visual Studio as code. This solution is designed to speed up the development process of designing and prototyping Universal Windows Platform and Android UIs.

“Urban legend has it that some of the greatest ideas in history started with a napkin. The Gettysburg Address, the poem that gave way to the U.S. National Anthem, and the premise of the Harry Potter series—each were reportedly born into the world through the medium of sketches on scrap paper—and when app creators put pen to paper for their ideas, this is often a canvas of choice. While rapid prototyping with the napkin and the whiteboard holds its charms, less charming is the prospect of translating quick sketches into working code,” Microsoft wrote in a blog post.

The first version of Ink to Code will support basic app visual elements such as labels, text fields, text paragraphs, images, and buttons. Teams can utilize this project as a way to brainstorm ideas together during meetings, according to Microsoft. It can also bridge the technology skill gap between employees of different technical skill or knowledge levels.

The project was created by students part of the Garage internship, which is a program that groups students in teams of 5-6 to build projects. Six students signed up to work on the Ink to Code project at the Microsoft New England Research and Development facility in Cambridge, MA, with a sponsorship by Xamarin. Five additional interns from MIT joined the project.

“We’ve all been in that situation as developers,” noted Alex Corrado, a senior software engineer on the Xamarin designer team, and one of the originators of the project. “Getting your ideas for a new app or feature onto paper is one of the fastest, most natural parts of the brainstorming. But then, you ultimately need to turn that sketch into code and sooner than you know it, 10, 20, 30 iterations of a sketch really add up.”