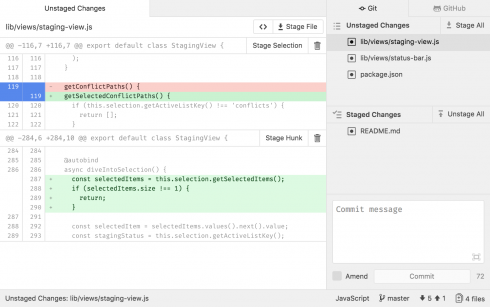 Atom is an open source text editor created by GitHub that allows users to create new branches, stage and commit, push and pull, resolve merge conflicts, view pull requests and more all from inside the user’s editor.

Atom offers users the ability to work across multiple platforms, including OS X, Windows, or Linux. It also includes a built-in package manager which allows developers to search for or create their own packages. Atom also offers smart autocompletion which helps developers write code quicker with its smart and flexible capabilities.

It also includes a feature called Teletype for Atom, which allows users to collaborate on code with the same ease as working alone.

According to the project’s website, Atom’s interface can be split into multiple panes so that developers can easily browse and open a single file, a whole project, or multiple projects from the same window. This makes it easy to compare and edit code.

Find and replace is another one of Atom’s features, and this allows developers to find, preview, or replace text as they type either in a file or across different projects.

Atom allows developers to choose from thousands of open source packages that provide new features, as well as the ability to build a new package and publish it for public use. Atom also offers users pre-installed UI and syntax themes in both light and dark colors, and the ability to create their own custom theme or download one from the community.

On top of that, Atom also comes stocked with an easily customizable design that functions to allow users the option to modify the look and feel of their UI with CSS/Less, and add major features with HTML and JavaScript.