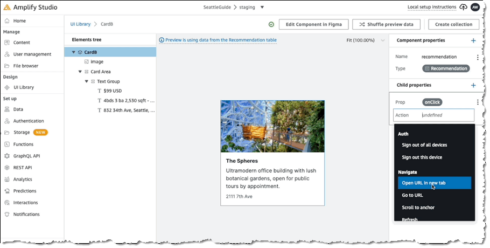 AWS recently announced the general availability of Amplify Studio, a visual interface that works to simplify front and backend development for web and mobile applications. The platform was first presented as a preview during AWS re:Invent 2021.

With this, users gain access to an integration with Figma, helping designers and front-end developers to work collaboratively on design and development tasks.

The GA version also offers new features such as support for UI event handlers, component theming, and improvements in how users can extend and customize generated components from code.

Additionally, Amplify Studio extends on the ease of configuration that is provided by AWS Amplify by bringing it to front-end developers who can then use it to work with prebuilt and custom UI components for those applications.

These components are themeable, which allows customers to override the default themes and customize components based on their own company’s style guides. Components can also be bound to backend services without cloud or AWS expertise.

Backend developers can also take advantage of Amplify Studio in order to continue development and configuration of the applications backend services.

To learn more about this release, see here.