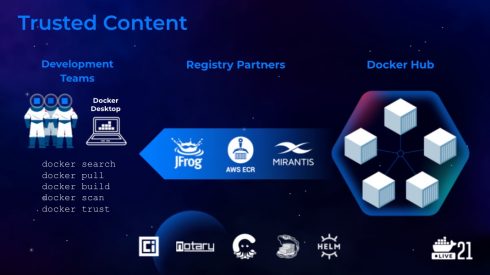 “Today’s developers face a variety of languages, frameworks and architectures, as well as discontinuous interfaces between tools for each pipeline stage, resulting in application development that is enormously complex to get from source code to cloud runtime,” said Donnie Berkholz, vice president of products at Docker. “Today’s announcements empower developers to ship faster by bringing their ideas to reality with Docker.”

Docker Development Environments is a new collaborative team development experience that will be available next month. Version 2 of Docker Compose incorporates the Docker Compose command into the Docker CLI and includes improved support for GPU, deep learning and multi-environment configurations. Scoped Personal Access Tokens have been improved with support for fine-grained permissionings, which will be released later this summer. The new tokens define access to read only, read and write, and read public repos only.

Also announced at the conference is an expansion of Docker’s trusted content offering. The company launched the Docker Verified Publisher program to provide access to trusted content that developers can use as the building blocks for their applications. Datadog, Red Hat and VMware have joined the program.

“We are thrilled to announce the Docker Verified Publisher program’s availability to even more publishers and the distribution of Docker Official Images to even more developers through even more registries,” said Scott Johnston, CEO of Docker. “This greatly expands choice for developers to complement Docker Official Images and solidifies the Docker platform and Docker Hub as the de facto standard for trusted, secure container images.”