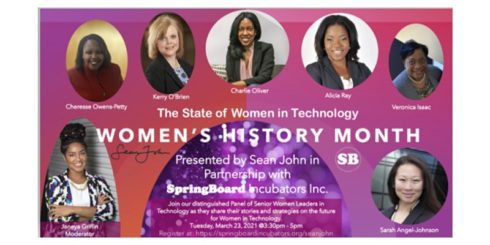 It should come as no surprise that the tech industry is a very male-dominated one. In fact, a 2020 survey from Adeva IT showed that women make up only 25% of the tech workforce.

“The solution [to this under-representation] requires collaboration and allyship,” said Janeya Griffin, founder and CEO of The Commercializer, which provides consulting services to minority-serving institutions.

In celebration of Women’s History Month, SpringBoard Incubators and sportswear company Sean John hosted the State of Women In Technology, which was a panel featuring several women from different areas of technology to discuss their experiences, and how the industry can do better. Speakers included Cheresse Owens-Petty, senior manager of digital learning at Marriott International; Kerry O’Brien, a registered nurse who does a lot of work around bringing technology into nursing to improve patient outcomes; Charlie Oliver, founder and CEO of Tech 2025; Alicia Ray, senior manager of product marketing and strategy at FreeWheel; Veronica Isaac, lead project manager for PSEG Long Island; and Sarah Angel-Johnson, CIO of Save the Children. The panel was moderated by Griffin.

RELATED CONTENT: There’s a diversity problem in the tech industry and it’s not getting any better

Angel-Johnson believes the way we raise our children has a huge impact on womens’ success in the workforce. For example, we raise girls teaching things like “play nice, get along” and just general conflict avoidance, while boys are taught to tough it out or go “rough and tumble it.” She even noticed this creeping into the way she had been raising her own girls. “I would look to how we raise our girls and changing the way that we nurture and cultivate,” she said.

Oliver also recommends women be aware of the narratives they’re being fed throughout life, from politicians, the media, and even your family. “If there’s one thing I learned from sitting in a room of older white men who are privileged, highly educated, well-paid, and sitting in on their creative process when they were coming up with all this great stuff, and they would turn to me, and I’m the script coordinator in the room so I have to turn this into a script at the end of the night, and they would turn to me and say ‘Charlie, what did you think of it?’ Now they in their ego were saying it was great, and I would look at them and tell them straight out this is problematic and I would give them my feedback.” What she got from that experience was that not only was she able to express her thoughts, but those other writers began to see that she had good ideas.

When describing being a woman in technology, one word comes to mind for Oliver: resilience. “If you are a woman in tech, you understand what it means to have to fight,” she said.

Oliver predicts an explosion in the number of women-owned businesses in the next three years. Owens-Petty explained that because of the pandemic a lot of women were forced to leave their jobs, but that doesn’t mean they stopped working; they’re at home learning and gaining knowledge. “They’re not gonna be working for you, but they will be working. So just watch and see what happens in the next three years,” said Owens-Petty.

A survey from Red Hat backs this up, citing that 20% of adults in Europe surveyed took up computer programming as a new skill during the pandemic.

“We have a place that is rightfully ours,” said Oliver. “That development of the future, that we haven’t always rightly been a part of…I can tell you it is imperative for the sake of our survival that women step forward and do what we’re supposed to do.”

Going back to the idea of being more aware of the things we teach our children, Isaac added that children are very technically savvy and already have a jump on where we are in terms of knowledge about technology. She said that she encourages her two boys, and younger people that she mentors, to always be looking for apps or technology that will help them.

Isaac also recommends getting certifications for different technologies, and that sometimes these certifications are free or low-cost. For example, Salesforce and AWS are two technologies that you can get certified in that will put you ahead. “You can get the knowledge of a professional before you’re even in the workforce,” said Isaac.

Isaac also added that it can be beneficial to reach out and help someone who is struggling in their technical journey because often what ends up happening is you both learn together.

Five key practices companies should adopt
Almost half of women in technology leave the industry by the age of 35, and a non-inclusive company culture is a main contributor for their leaving, according to the Resetting Tech Culture survey conducted by Accenture and Girls Who Code, which surveyed 2,700 college students, 500 senior HR executives, and 1,990 tech workers.

The report listed five key cultural practices that companies can adopt to help women on their teams thrive:

Three ways to boost your career in technology
In addition, Angel-Johnson listed three things women can do as well to further their careers in technology: branding, mentoring, and leaving a legacy. Branding involves looking at your strengths and determining how they differentiate you from others. For example, Angel-Johnson sees herself as a change agent, so she focuses on having people see that whenever she’s around she can help make change happen.

Finally, consider the legacy you want to leave behind as a woman in technology. Angel-Johnson describes a class she took where she had an assignment to write her own obituary. She admitted that it was a bit morbid, but it did force her to think of a few things. She noted that it’s important to have measurable impacts for this step in order to differentiate you from others. “If you didn’t measure it, it didn’t happen,” she said.

Grace Hopper Celebration is more than just a tech conference