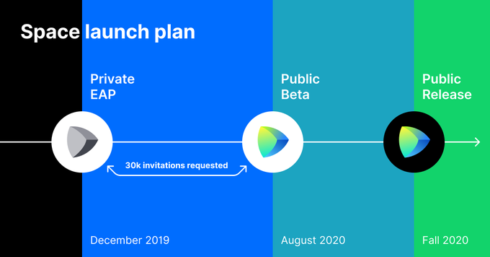 JetBrains has announced a beta for Space, which is a new platform that acts as an integrated team environment. According to the company, Space allows development teams to better organize, communicate, plan, and build and deliver products.

For the past eight months the platform has been in an early access program (EAP). Since announcing the EAP, JetBrains received over 30,000 invitation requests, processed 800 issues, and resolved 500 issues.

The company plans to officially launch Space in Fall 2020.

According to JetBrains, the top requested features have been around automation, enhanced issue tracking and project management, and a standalone version. The company has implemented many of these requested features and is in the final testing stages for them. The key features that have been added during the EAP period include turn-based code reviews, a personal to-do list, NuGet packages, a container registry, Maven repository support, 2FA support, squash merge, a Space Guide, and enhancements to chats, meetings, calendars, mobile apps, and issues.

JetBrains also recently launched the Space Partner program to bring in partners that would like to potentially integrate with Space.

For more information leading up to the official release, visit Space’s official roadmap.