In an effort to make it easier for developers to “work where they are” yet still get a bigger picture of enterprise projects and what’s coming down the pike, several project management tools providers are bringing their solutions down to the engineering level.

These tools have been important for project managers, but three relatively new companies —  Anaxi, Clubhouse and ZenHub — think it’s equally important for developers to have the broad view, while still being able to see their assignments and provide a view into their work without interruption. Meanwhile, Atlassian — whose Jira solution dominates the market — has put integrations in place to remove what has essentially been a tax on developers to manually update their status in the tool, which takes them out of their development environment and costs them in terms of time and having to refocus on the work they were doing.

Aaron Upright, co-founder of ZenHub, said his company’s offering is designed “to reduce the context-switching, and the inefficiencies that creates,” when developers have to leave their workspace to update the project management tools.

In fact, Sean Regan, head of developer growth at Atlassian, cited a statistic that showed 56 percent of developers say they have to update tools more than once per day, and need to check 3.3 tools for the status of a project.

APIs are the order of the day, as each solution relies on integrations so users can remain in the tools they prefer, but gives visibility into the bigger plan and the work that will be necessary to complete. “When you have APIs, you need fewer project managers and fewer updates to the tools,” Regan said.

Kurt Schrader, co-founder of the project management platform Clubhouse, explained that his company built out its solution to work well for software and hardware teams from day one. “We’ve tried to build something that lets teams manage their tasks, manage their work like a lot of traditional software project management tools let you do, but also to pull back and see things from a high level, see what the priorities are for the company, what are the five or six big things you want to build this quarter,” he said. “I think we’ll see a movement away from structured, monthly road maps to sort of a continuous flow of information, your big things, and we want to enable that so organizations can move quickly, have their work in there but be able to pull back so everyone that needs to participate can get the next feature, the next value out the door, and still work together in sync.”

People like to work in the tools they’re comfortable with, and that work for them. A developer working in GitHub, for instance, can link their work to a Clubhouse task — it calls them Actions — that they’re performing and just work. There’s no need to go back into the management tool and do updates. “We’ve tried to lower the bar of overhead as much as possible, so that what you see in Clubhouse really reflects the actual truth of the world,” Schrader said. The Anaxi and ZenHub offerings also work with GitHub.

Atlassian, of course, is the acknowledged big gorilla in the project management space, run by a big number of big organizations. Clubhouse entered the market targeting companies of 50 to 100 people, and is now looking to scale upward, while retaining its core mission of making developer lives easier.

“To me, the goal of Jira is has always been that everybody works together, to build things, and track the work that’s going on,” he said. “But because of the way it’s grown over the years, you‘ll see a situation where there’s a program manager or a project manager basically walking around asking, ‘Is this up to date?’ We did things from the very beginning to say, ‘This is the thing you’re going to building for the next week, or choose the thing you’re going to build the next week.’ Where do you want to work? GitHub? So you can hook your GitHub branch to it, and as you build things in GitHub, as you open a pull request, as you branch, it automatically moves things for you. You don’t have to come into Clubhouse to move things around, you just have to be in there so if somebody has a question, you can respond through email, respond through Slack… wherever you want to work, let’s make it as easy as possible to have this reflect reality without someone wandering around asking, ‘Is this up to date? What’s going on with this?’”

The company, though, is quite aware that organizational teams need to collaborate, and it says that Clubhouse can bridge communication gaps between teams.

“The beauty of what we’ve created is we’ve kept it really simple and intuitive so teams outside of engineering and product can communicate and collaborate to ship products,” said Mitch Wainer, CMO at Clubhouse and co-founder of cloud provider DigitalOcean. “I experienced this pain at DigitalOcean… What we saw is that it siloed teams, because engineering teams were using Jira and marketing was using Trello and Airtable, depending upon the team. You see a lot of fragmentation. Clubhouse has struck the balance between simplicity and flexibility, so you’re able to bridge that gap of communication in the organization. If you’re a CTO or leading the organization, it’s nice to have a birds-eye view to see the status of a project, its lifecycle from start to finish.”

Part of what makes project management so complex is the mix of people involved in seeing work through to its completion, and overcoming the reality that each stakeholder has a preferred tool for work, communication and collaboration.

“Development is a team sport,” said ZenHub’s Upright. “If developers are in their dev environments committing code all day, they could be blind to other aspects of the project. Instead of developers being pulled into meetings with project managers who will ask for their status, it’s better to have that conversation asynchronously in the tool.”

Upright said that developers working in GitHub today have no way to get insights into how work is piling up, which areas of the work board are increasing or decreasing, or how issues are being handled in the pipeline. To help with that, ZenHub today  is releasing new reporting capabilities in its platform. “There are so many personas around project management, so how do we serve them a little better with data and insights we can generate? Our reporting suite is a manifestation of that.”

ZenHub takes advantage of the underlying structure GitHub provides. “We use GitHub issues, or pull requests, and display them on a board and integrate that into our reports,” Upright explained. “We don’t need to create our own system.”

Anaxi, a startup that literally is just getting started, provides an interface for Jira and GitHub that enables users to create project threads similar to Slack channels, but never extracts data, leaving it more secure and as the single source of truth. The mobile web application, made publicly available in December for iOS, gives users an organized stack on top of Jira and GitHub for tickets, pull requests and conversation. It can also be filtered to give the user insights into only the things he or she needs to see. 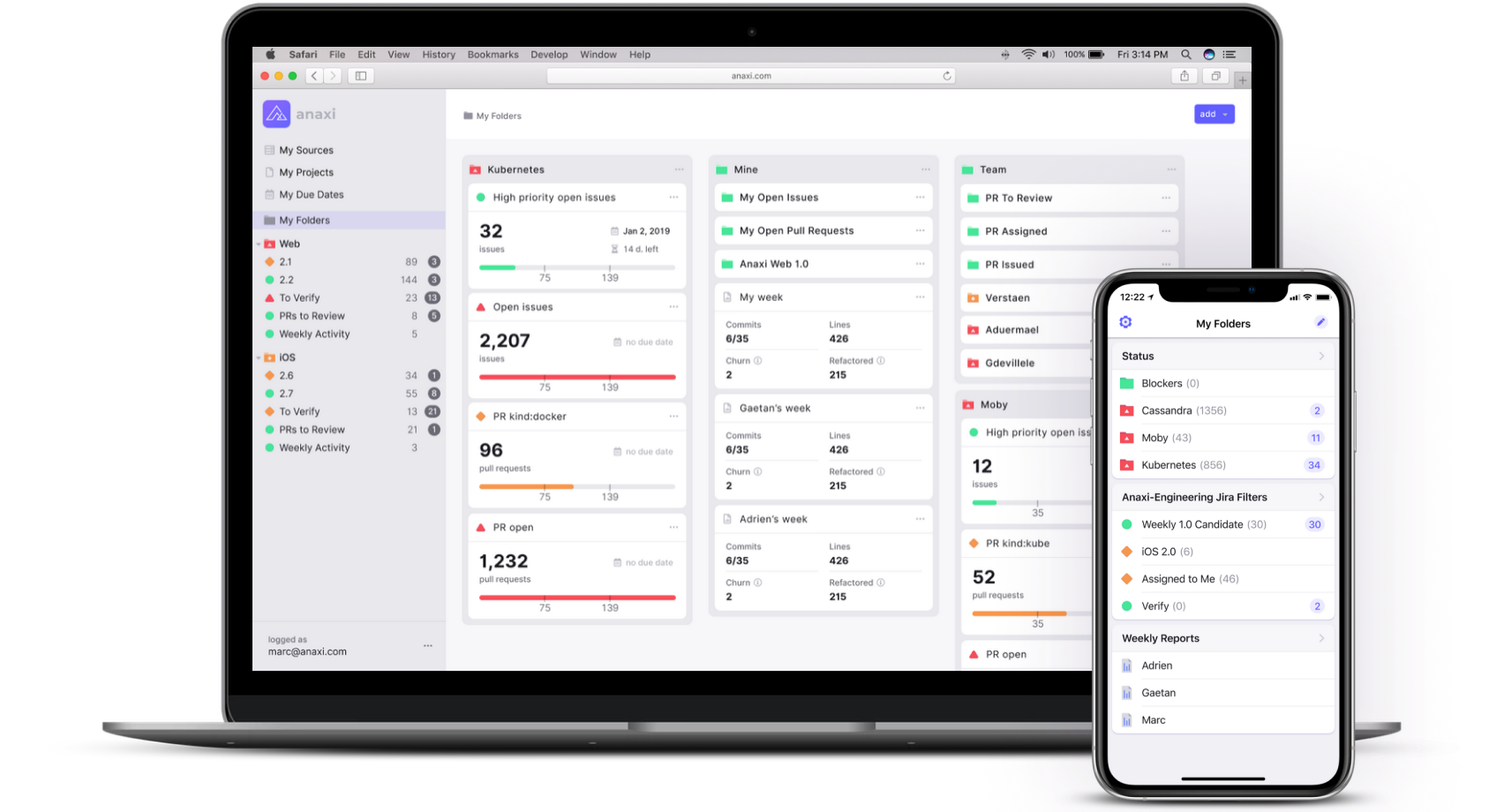 Marc Verstaen, co-founder and CEO at Anaxi, explained that Anaxi does not have access to its customers’ data; it uses IDs to query the back-end servers and presents the answers to the users. “All the work is done by the Jira server, or GitHub,” he said, noting that method keeps the data secure— especially an organization’s issues.

“Issues are something very personal for a company, even more than the source code,” he said. “In source code, you wouldn’t know the next features. If you get access to the issues that Apple is managing, you’d know the problems that will not be fixed and why, you’d have vision of the next release, ones being considered for future, etc. So gating access to issues is much more personal.”

Meanwhile, Atlassian is signaling a strategic shift after adding integrations over time with developer tools that let developers have more autonomy over their work while still giving managers the views into project progress they need.

“The is no common way of doing work; there are too many tools,” said Atlassian’s Regan “The software world needs a protocol for work.”

Atlassian sees Jira as that protocol, a bus beneath all the tools in use, Regan said. Atlassian too wants developers to work where they are, saying the company can bring JQL to Microsoft Excel or Google Sheets. “People are working in an IDE, in Git, Sketch, or doing CI/CD and deploy,” he said. “They all want to work in the tools that are best for their job. You need a common protocol underneath, and that’s what we’re doing with Jira.”