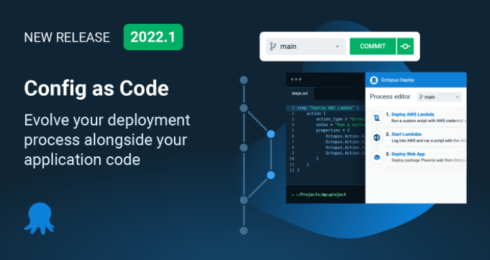 Continuous deployment orchestration provider Octopus Deploy has announced the release of its configuration as code feature as part of its 2022.01 release

According to the company, typically DevOps engineers don’t have visibility into their CI/CD pipeline configurations, preventing them from adding new features to that configuration. Many of the available “as code” implementations often compromise on usability and require developers to learn a new language in order to use them.

With Octopus Deploy’s configuration as code capability, developers will be able to see the deployment process in Git alongside their application code. This makes it easier to evolve them both alongside each other.

Developers can also work in the environment they prefer, or use the Octopus UI to do tasks like configure a Git repository, select a branch, and commit changes. Octopus Deploy has also built a Visual Studio Code extension for editing configuration files.

“Config as Code has been one of the most requested features from our community. But when we asked customers about Config as Code in other products, we heard positives and negatives. They spoke about the power of Git and version controlling their processes, but also about their reduced user experience and the frustration of hand-writing YAML. So we set out to build something better. We wanted to give customers all the upsides of Config as Code, with none of the downside,” said Paul Stovell, founder and CEO of Octopus Deploy.