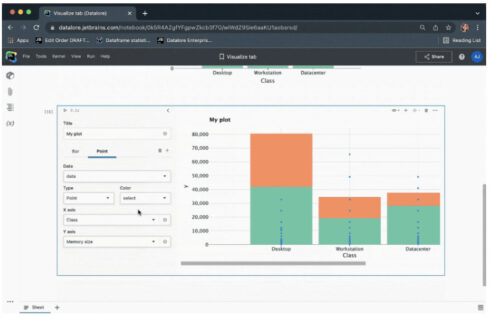 The team at JetBrains recently announced new updates being made to JetBrains Datalore. Among these updates are improvements made to the look and feel of the Visualize tab, such as

Additionally, JetBrains Datalore has added transitions from the Visualize tab to Chart cells, allowing users to more easily customize plots and create multi-layered visualizations on them.

Several other updates have been made including improvements to storage optimization for Reactive mode, hiding cells on a specific worksheet, and rendering of scala-datable. To learn more, visit here.

The launch of fused testing includes

This announcement comes on the heels of an influx of Series B funding announced in October as well as an annualized revenue run rate of over $20 million. To learn more, visit here.

Microsoft today announced the new Azure SDK release for the month of January. This release brings updates to many libraries, including

Additionally, stable releases this month include Azure Cosmos DB for Java, Azure Tables for .NET and Java, Azure MonitorQuery for .NET, and several others. This month also brings many beta releases, including Azure Form Recognizer for Java, Identity for Go, and Schema Registry Avro for .NET.