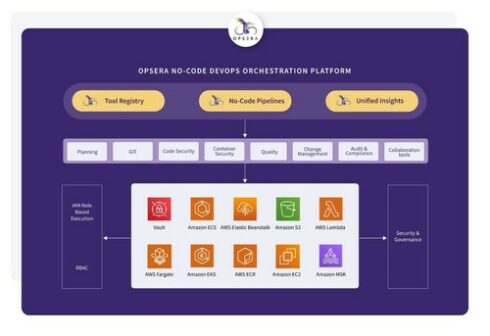 Opsera today announced that it is working with AWS to streamline and automate software delivery management across containers, virtual machines, serverless and Kubernetes. In addition, Opsera is also now available in AWS Marketplace, allowing AWS users to leverage their no-code DevOps orchestration platform for software release and IaC automation.

With native AWS integrations, Opsera customers can move to the Cloud while managing software delivery in one central platform. With this, users can leverage Opsera’s no-code pipelines to deploy workloads on AWS.

The availability of Opsera in AWS Marketplace makes it simple for customers using AWS to utilize the benefits of no-code DevOps orchestration, such as integrating and maintaining toolchains, according to Opsera.

Trifacta today announced an integration with dbt Core. With this, users gain access to a blend of low-code and code-based tools to support data pipeline development and collaboration among data engineers, data analysts, data scientists, and business analysts.

This integration allows dbt Core users to import datasets created from dbt Core models into Trifacta for visual data profiling during model development. Data professionals can then use these profiles to interpret data quality, validate data shape and breadth, identify outliers, and serve as a guide while defining test conditions for their models.

This integration enables dbt Core users to understand key statistics and data patterns generated by their dbt models and dependent models before optimizing them. Once dbt model datasets are imported and visually profiled, users can leverage them across the organization.

ClickUp today announced that it has raised $400 million in Series C funding in order to reshape how teams work and give businesses a competitive advantage. The funding is co-led by Andreessen Horowitz and Tiger Global with participation from Lightspeed Venture Partners and Meritech Capital Partners. This announcement represents the largest Series C funding round to date in the workplace productivity market.

This new funding round brings ClickUp’s total funding to $535 million. This additional investment will be used to expand ClickUp’s global footprint and bring new talent to the organization. Additionally, the company will use these funds to accelerate the development of new products  as well as brand new features, while also scaling the awareness and usage of ClickUp to a wider audience.

To learn more about this funding and ClickUp’s growth, visit here.