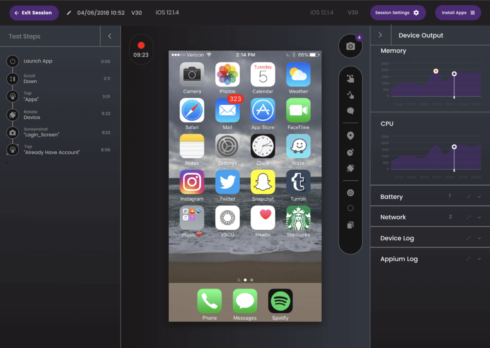 Organizations are automating more types of tests to keep pace with DevOps and CI/CD, but they all face a common challenge which is automating mobile testing.

“Getting to automation is a big challenge with mobile,” said Frank Moyer, CTO at Kobiton. “It’s painful, because unlike the web world where there’s a W3C specification for HTML, in the mobile world, all of the manufacturers can render the XML however they choose. Each generates the DOM in a unique way which makes it impossible for automation engineers who need to navigate through an application to use a single selector that fits all devices.”

To navigate through an app effectively, one needs to write a test automation script that can execute across the multitude of devices customers actually use. Then, hours must be spent combing through the tests to detect problems identified on the different devices.

End-to-end mobile testing platform Kobiton speeds and simplifies the process so businesses can get to market faster with better quality mobile apps.

“We use machine learning so manual testers and automation engineers can accomplish more in less time,” said Moyer. “All you do is run a manual session and we can automate that test across hundreds of devices. It will tell you that these two devices crashed, these three devices have performance issues or if the text on the screen wraps off the edge incorrectly on these four devices so you need to address those issues.”

Kobiton Intelligent Test Automation integrates with defect tracking systems so defects can be created in context. Best of all, the entire flow is seamless from manual test creation to test automation to defect identification and remediation. Kobiton remembers all of it so customers can benefit from regressions between one release and the next.

Kobiton Alleviates Pain Points
A recent Kobiton survey of 350+ mobile developers and software testers reveals that although 55% said automation would improve software quality, 76% are automating fewer than half of all software tests. About half (51%) are releasing software updates daily or weekly, but 73% are running at least 100 manual tests before each software release.

Although test automation is a mature concept, 58% said their automation programs are either new or at least six months away from beginning. The biggest barriers to achieving automation are evaluating and choosing test automation tools (20%) and training and acquiring skilled automation engineers (17%). Seven in 10 said they recognize mobile is strategic or critical to their business.

With Kobiton Intelligent Test Automation, those same professionals could create functional test scripts that provide the quickest path to mobile automation at scale. Because Kobiton fully supports a variety of assertions, test scripts can be as simple as checking an app’s layout or as complicated as performing complex functional logic tests.

Importantly, organizations can deliver better mobile experiences by testing on real devices, in the cloud or on premises, while leveraging the latest in Appium test automation for seamless test script creation. As the first and only mobile scriptless test automation platform, Kobiton accelerates testing and delivery.

And, instead of choosing between on-premises devices or devices in a test lab, Kobiton allows customers to take advantage of both to achieve truly hybrid mobile testing.

Mobile Test Automation Just Got Simpler
Kobiton recently announced it is taking mobile test automation to an entirely new level. As of the latest release, Kobiton Intelligent Test Automation generates 100% open standard Appium code which can be customized, run on a competing device testing platform or integrated into a DevOps process.

Manual testers and automation engineers are able to run a manual session on a specific device, such as an iPhone X, and within 20 minutes export the fully-functioning Appium script which is capable of running on more than 350 different devices.

Companies using other device clouds, such as SauceLabs, BrowserStack, and Perfecto, can simply point Kobiton at those environments. The result is higher levels of test automation with minimal time and effort.

“Organizations want to accelerate their digital app initiatives. To do that, they need a complete mobile experience platform that’s flexible and easy to use,” said Moyer.