Report: React is gaining in popularity, but Angular remains in the lead 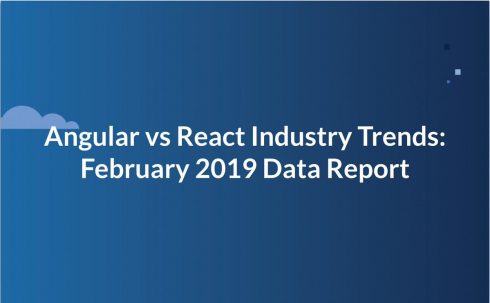 Angular has been viewed as the number one front-end web development framework in recent years, but a new report reveals that React might just surpass it. Cloud Academy released its February 2019 Angular vs React Industry Trends, which revealed Angular is maintaining its enterprise lead, but React is quickly growing.

Cloud Academy’s research looked at full-stack developer job posts and found that Angular is mentioned 59 percent of the time, while React was only mentioned 37 percent. It is also important to know that Vue.js, another JavaScript framework, had four percent of the mentions. However, the organization explained Angular’s popularity in job postings may be a result of it being around longer. When Cloud Academy spoke with front-end engineers, it found React was a tool of choice. Stack Overflow’s annual developer survey found React was the top most-loved framework. Additionally, the organization also found “there is more love and less dread for React than Angular” among developers.

Google Trends data also found that interest in React is outgrowing Angular in the United States, according to Cloud Academy.

When it comes to what type of skills employers are looking for in developers, the report found that they either want developers to be proficient in React or Angular, but not both.

“So far, we’ve seen React rocket from zero to what appears to be at parity with or overtaking Angular in developer communities. We’ve already seen it overtake Angular among smaller organizations,” Cloud Academy wrote in its findings. “There is another reason to expect that React’s popularity among developers will spill over into the enterprise over the coming months: its switch in late 2017 to the MIT license.”