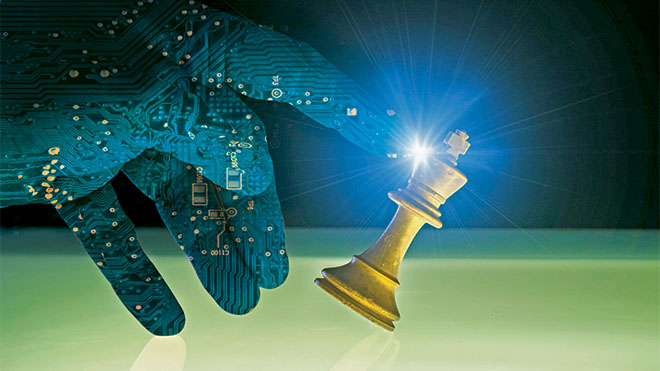 The year started with Facebook’s CEO Mark Zuckerberg announcing his plan to build an artificially intelligent assistant to do everything from adjusting the temperature in his house to checking up on his baby girl. He worked throughout the year to bring his plan to life, with an update in August that stated he was almost ready to show off his AI to the world.

In November, Facebook announced it was beginning to focus on giving computers the ability to think, learn, plan and reason like humans. In order to change the negative stigma people associate with AI, the company ended its year with the release of AI educational videos designed to make the technology easier to understand.

Microsoft followed Facebook’s pursuit of artificial intelligence, but instead of building its own personal assistant, the company made strides to democratize AI. In January, the company released its deep learning solution, Computational Network Toolkit (CNTK), on GitHub. Recently, Microsoft announced an update to CNTK with new Python and C++ programming language functionalities, as well as reinforcement learning algorithm capabilities. In July, Microsoft also open-sourced its Minecraft AI testing platform to provide developers with a test bed for their AI research.

But the company’s AI goals didn’t stop there. At its Ignite conference in September, CEO Satya Nadella announced his company’s objective to make AI easier to understand. “We want to empower people with the tools of AI so they can build their own solutions,” he said. Following Nadella’s announcement, Microsoft formed an artificial intelligence division known as the “Partnership on AI” with top tech companies such as Amazon, Facebook, Google DeepMind and IBM. Microsoft ended the year teaming up with OpenAI to advance AI research.

Google started the year with a major breakthrough in artificial intelligence. The company’s AI system, AlphaGo, was the first AI system to beat a master at the ancient strategy game Go. In April, the company announced it was ready for an AI-first world. “Over time, the computer itself—whatever its form factor—will be an intelligent assistant helping you through your day,” said CEO Sundar Pichai. “We will move from mobile-first to an AI-first world.”

Pichai reiterated that sentiment at the Google I/O developer conference in May where he announced that the company’s advances in machine learning and AI would bring new and better experiences to its users. For instance, the company announced the voice-based helper Google Assistant, updates to its machine learning toolkit TensorFlow, and the release of the Natural Language API and Cloud Speech API throughout the year. To help bring wider adoption to AI, Google also created a site called AI Experiments in November designed to make it easier for anyone to explore AI. The year ended for Google with the open-source release of its DeepMind Lab, a 3D platform for agent-based AI research.

IBM, the company known for its cognitive system IBM Watson, also made waves in the AI world this year. The company started the year with the release of IBM Predictive Analytics, a service allowing developers to build machine learning models. In October, the company announced the Watson Data Platform with Machine Learning, and a new AI Nanodegree program with Udacity at its World of Watson conference in October. The company ended the year with the release of Project DataWorks, a solution designed to make AI-powered decisions. It also announced a partnership with Topcoder to bring AI capabilities to developers.

There was a smattering of AI news to be found as well. Baidu Research’s Silicon Valley AI Lab released code to advance speech recognition at the beginning of the year. NVIDIA began to develop AI software to accelerate cancer research. Carnegie Mellon University researchers announced a five-year research initiative to reverse-engineer the brain and explore machine learning as well as computer vision. Researchers from MIT’s Computer Science and Artificial Laboratory developed a technique to understand how and why AI machines make certain decisions. Big Data companies turned to machine learning and deep learning techniques to help derive value from their data. OpenAI rounded out the year with the release of Universe, a new AI software platform for testing and evaluating the general intelligence of AI.

Artificial intelligence is “intended to help people make better decisions. The system learns at scale, gets better through experience, and interacts with humans in a more natural way,” said Jonas Nwuke, platform manager for IBM Watson.