Applause released its third annual mobile retail apps report today, which highlighted what some of the top retail apps are doing right, and where some mobile apps fell short. However, the overall score of these mobile apps show development teams how far retailers still need to go to meet the needs of the user.

ARC from Applause analyzed the 1.2 million mobile app reviews in the App Store and Google Play Store of 50 global retailers with the most sales to determine what actually is getting customers to stick with their mobile apps.

ARC analyzed both native Android and iOS apps among the 50 retailers, and to quality for inclusion, individual retailers needed to transact 40% or more of their total 2015 sales via their mobile apps, according to the report. In total, Applause was able to analyze 43 of the top 50 retail apps.

The mobile user sentiment is analyzed by the Applause Mobile Sentiment Analysis, which is a SaaS tool that “crawls” app store star ratings and user reviews to see how users feel about the quality of a mobile app. The top-rated apps are available on both Android and iOS:

Applause’s tool sifts through both app stores and looks for keywords like “crappy,” “buggy” or “amazing,” and then it calculates a rating based on the correlation of both star ratings and consumer reviews. Applause Mobile Sentiment found the global average across more than 30 million apps to be 67.3. The retailers with the most sales from retail apps came in with a score of 52.3, compared to last year’s study, which had an average of 43 out of the 95 most popular retail apps.

Why some won and why some lost
According to Ben Gray, digital experience analyst at Applause and author of the report, the reason why some of these apps are top-rated has to do with the speed of the app. The top apps are moving “way faster than some of their competition, especially some of the more traditional brick and mortar,” he said.

On the other hand, the retail apps that were poorly rated had problems staying “relevant.”

According to Gray, some of the issues with the apps that didn’t make it to the top had to do with the retailer being born in the era of brick and mortar, so they aren’t too familiar with the mobile app economy and what users expect from an application. The result is an app with plenty of bugs and features that users aren’t able to fully utilize. 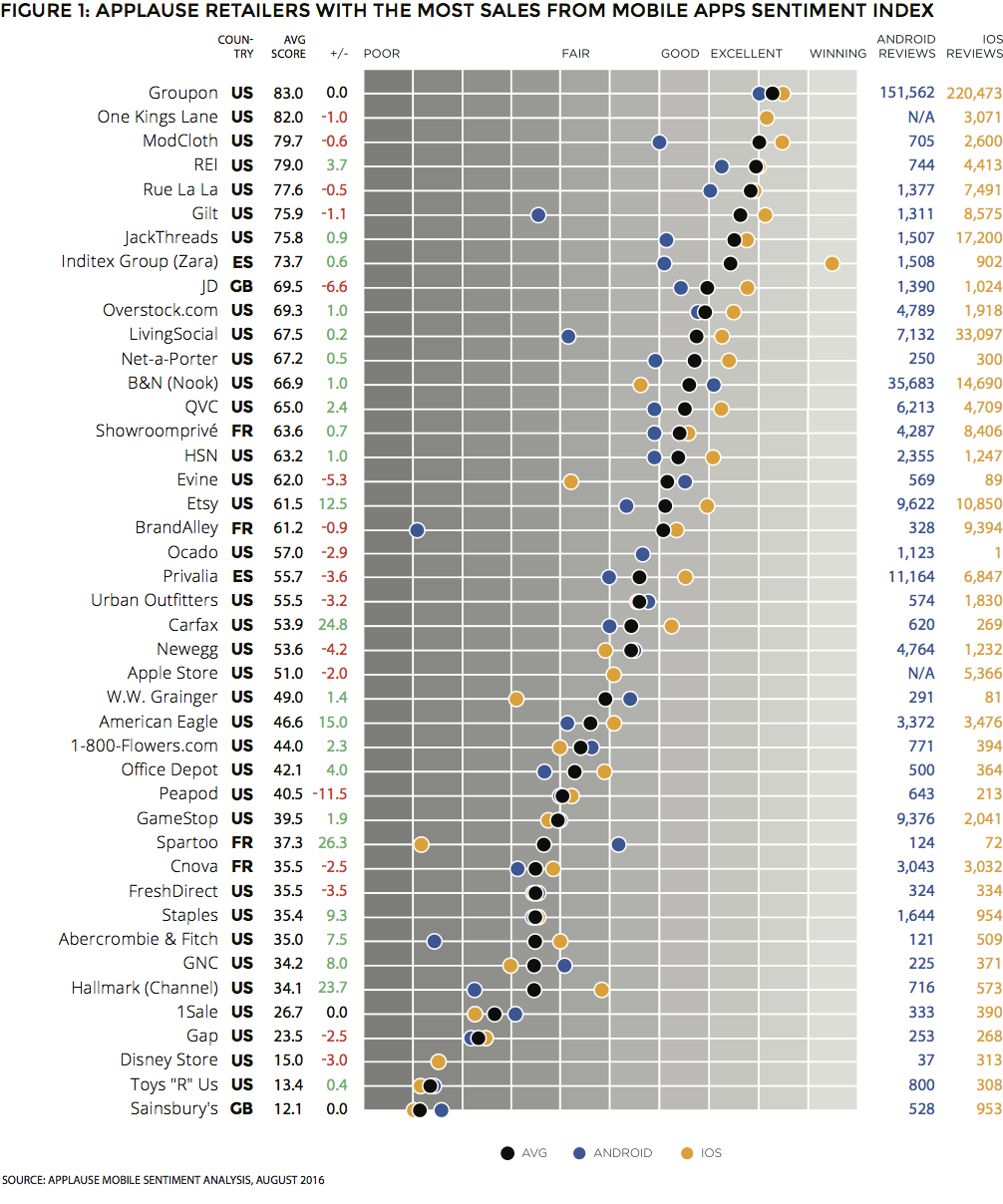 The leading apps, according to user reviews, in 2016

Part of the reason why these apps are riddled with low-star ratings and negative feedback could also be because retailers are not listening to their users and are not taking full advantage of how vocal they are when rating apps, according to Gray.

“I can’t help but come to the conclusion that most do struggle to listen to what their users have to say,” he said. “I think they more often than not rely on the app stores themselves to send them a weekly e-mail or a quick snapshot, but that level of feedback can get overwhelming quickly. This report alone crawls 1.2 million app store star ratings and user reviews, and that’s a lot of feedback to digest.”

The next step for retailers is to realize that it’s not just about launching a great mobile app, it’s about “optimizing the customer journey,” regardless about where the user is physically or what device they are using.