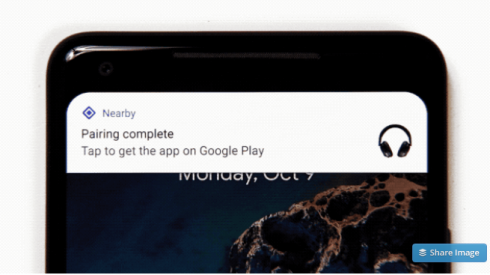 Google is announcing Fast Pair, a new process for pairing Bluetooth devices on multiple Android devices. It works on Android devices that are running Google Play services 11.7+ and has compatibility back to Marshmallow. It can currently be used with Google Pixel Buds or Libratrone’s Q Adapt On-Ear, with support being added soon for Plantronics Voyager 8200.

“Ease of use, speed and security are the design principles driving the Fast Pair specification. Fast Pair uses BLE (Bluetooth Low Energy) for advertising and discovery and uses classic Bluetooth for pairing,” the Android team wrote in a post.

TypeScript 2.6 is released
The latest version of the typed superset JavaScript language is now available. TypeScript 2.6 is built off JavaScrip, and adds optional static types to help catch typos and logic errors as well as editor completions and an easier way to navigate through code. It is available for Visual Studio now and will be added for other editors in the future.

Google announces eager execution for TensorFlow
Google wants to make it easier to get started with TensorFlow with the introduction of eager execution. Eager execution is an interface that allows operations to be executed immediately when they are called from Python, according to the company. The benefits of this include fast debugging, support for dynamic models, support for custom and high-order gradients, and almost all of the available TensorFlow operations. Google is looking for feedback on this experimental feature from those that try it out.

“Using eager execution should be intuitive to current TensorFlow users. There are only a handful of eager-specific APIs; most of the existing APIs and operations work with eager enabled,” the Google Brain team wrote in a post.

NVIDIA has new partnerships with both Booz Allen Hamilton and deeplearning.ai to help further the training program. It also has a new University Ambassador Program that allows instructors around the world to teach students the practical applications of AI at no cost. It will be adding new courses designed around domain-specific applications of deep learning such as finance, natural language processing, robotics, video analytics, and self-driving cars.

“The world faces an acute shortage of data scientists and developers who are proficient in deep learning, and we’re focused on addressing that need,” said Greg Estes, vice president of developer programs at NVIDIA. “As part of the company’s effort to democratize AI, the Deep Learning Institute is enabling more developers, researchers and data scientists to apply this powerful technology to solve difficult problems.”