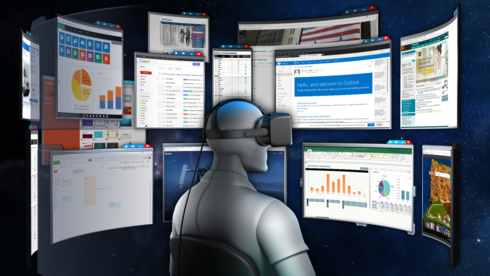 Envelop VR has introduced its Envelop for Windows, a computing platform that enables interaction with Windows applications while immersed in a virtual reality headset.

Envelop for Windows allows users to shop online, watch YouTube videos, and work in Microsoft Office, all at the same time. With this product, users can have control over each window’s size and location in a three-dimensional space. Users can also open multiple windows, adjust them to their liking, and place them wherever for more customization and improved productivity while computing.

The software also comes with designed environments so users can change their backdrop scene and personalize their virtual reality space. Envelop runs on Windows 10 with a VR-ready GPU, according to the company.

Envelop for Windows will allow a soon-to-be-released SDK that will allow developers to extend legacy two-dimensional applications and websites, according to the company. Envelop software will also allow developers to use the toolkit to create new VR content or enable them to easily turn legacy content into virtual reality content.

Envelop for Windows is compatible with the HTC Vive and Oculus Rift VR headset. The beta is available to the on Steam for free.

Apple to pay bug bounty for reported flaws
Apple is taking extra steps to finding product and software flaws by paying outside hackers bug bounties. This includes US$25,000 for reported digital compartments flaws, $50,000 for a way into iCloud data, and $200,000 to turn over critical vulnerabilities in Apple’s firmware, The New York Times reported.

Apple announced the list of vulnerabilities at Black Hat USA, even though Apple has stayed away from offering bug bounties for years, the report said. Originally, it credited anyone who turned over bugs by putting their names on its website, which isn’t comparable to the other large companies like Facebook that pay their bug hunters handsomely.

Additionally, any hacker who donates their bug bounty reward to charity will see a matched donation from Apple.

Bellevue College will be the first college to join Coding Dojo’s Coding for Higher Education program, which is offered in Los Angeles, San Jose, Seattle and surrounding areas. Starting in the fall, Bellevue College and Coding Dojo will offer two new courses for two software stacks used to build websites and web applications. The courses will provide information on Ruby on Rails and JavaScript/MEAN.

Each course will include three modules on different aspects of the programming stacks, and the courses will combine onsite teaching with remote support from the online learning platform of Coding Dojo.

During July, the Visual Studio Code team slowed down feature work so it could reduce the bug backlog and remove engineering debt, according to a blog post. Some of the highlights include editor actions like open preview and switch to changes view returning to the title bar, as well as IME and copy/paste support in the integrated terminal.

With Visual Studio Code 1.4, there is better snippet and suggestions control, and a new insert snippet command with dedicated UI. In Workbench, Visual Studio Code has gained tabbed headings and put editor actions into the context menu to “gain some space,” according to the team. User feedback said that this made the actions harder to discover, which is why the team has added them back into the title header, it said.

Also, there have been some small improvements for the JSON completions, like completions for empty arrays, objects and strings if the property type is known but the schema does not describe any defaults. VS Code now supports restarting execution at a stack frame, which is useful to developers who are in situations where they want to rerun a small portion of the code with modified input values, the team said.