Charting the rise of the Citizen Developer

The Citizen Developers are taking over. A growing, highly motivated class of enterprise workers is using BYOD technology to build homegrown software that bypasses the traditional IT process, changing the way organizations operate.

Analyst firm Gartner defined a Citizen Developer as “a user who creates new business applications for consumption by [other employees within the company] by using development and runtime environments sanctioned by corporate IT.” Also know as a business user or a “power user,” Citizen Developers are making use of advancements in development platforms and cloud computing services to broaden the end-user application development cycle.

“A Citizen Developer is someone who has grown up with technology their whole life,” said Pete Khanna, CEO of TrackVia. “These Citizen Developers are doers; they’re the ambitious type within the organization that’ll say, ‘I know how to run my department better than anyone else. Why can’t I just build the technology to do it for me as well?’ They’re of the younger generation, and they’re not going to settle for something off the shelf that doesn’t do what they want it to do.”

“The thing about citizen developers is that they’ve been propelled forward by the software developers building easy-to-use tools for them,” Khanna said. “The mentality may be the same but there are far more of these people in organizations now. They know because of their software literacy that it isn’t hard. They can get data in through simple imports, they can manipulate the fields, records and reporting, and these are all through drag-and-drop technologies. They do it every day in their personal lives; they’re the Facebook generation, the Instagram generation.”

As part of this shift, the role of IT is transitioning from the driver of a business’ technology efforts to a service organization. Rather than building business applications and going through a back-and-forth of prototypes and tweaks, Citizen Developers are streamlining the process. Sixty-three percent of Citizen Developers find solutions outside of IT, compared to 39% of non-citizen developers, according to the report.

Citizen Developers are also doing this more with their own devices and apps, with the report revealing that 56% use personal apps to complete workplace tasks, compared to 28% of non-Citizen Developers.

“You have a generation of doers being promoted through the organization,” Khanna said. “They don’t want to rely on IT; they wanted to empower themselves. They’re also the ones driving the initiative in their business; these are the folks leading this company. They’re not the ones in a service organization asking how to get things done and waiting for someone in IT to lay out their options. They’re eliminating that factor altogether and going for it themselves.” The mindset of a Citizen Developer is based on a do-it-yourself attitude, quickly reaching solutions, and flexibility, according to Khanna. They know exactly what their department and business needs every month or quarter to drive the business forward.

“We’ve advanced that platform and that framework to encompass three levels we think all applications need,” Khanna said. “Record-level management for your data, workflow capabilities so you can take action on that data, and then dashboard visibility so you can actually interpret what’s going on over a period of time. The mentality shift is that I know the requirements, I can do it myself and I have business goals to hit. The technology needs to be secondary. That’s the evolution that’s happened.”

“Simplifying the workforce the same way Gmail did it and Google Apps has done it, that’s where the movement is going in the software space,” Khanna said. “You don’t have to take forever to get Microsoft Exchange up and install Outlook on every device your users are using. Citizen Developers are going to simplify business applications. Business users will have one place to go to look at their workflows, their tasks for the day and the report on their company to make decisions. That’s going to take a while, but it’s the big picture, and it’s already happening.” 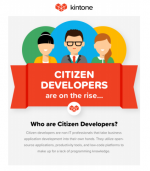