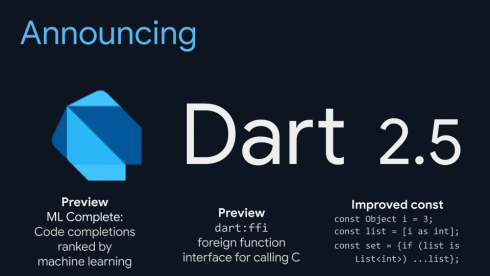 Google Developer Days kicked off in China this week with new features and updates for the developer community. The stable release of Dark 2.5 SDK was announced with technical previews of major developer features.

According to the team, code completions will help developers avoid misspellings and explore APIs. “As APIs grow, exploration becomes difficult, as the list of possible completions gets too long to browse through alphabetically. We’ve been working hard over the past year to apply machine learning to the problem,” the team wrote in a blog post.

Since ML Complete is still only in preview, it will not have the performance or polish expected in later builds, the team explained.

The dart:ffi foreign function provides better support for calling C code and enables developers to invoke C-based frameworks and components. The function is also in preview, and has some limitations such as no support for nested structures, inlines arrays and packed data.

In addition, the company announced Flutter 1.9. Flutter is an open-source mobile development framework, and version 1.9 is the company’s biggest update to date, the company explained. A major milestone in this release includes “successful integration of Flutter’s web support into the main Flutter repository,” the team explained in post, “allowing developers to write for mobile, desktop and web with the same codebase.

Other features of the release include support for macOS Catalina and iOS 13, improved tooling support, new Dart language features and new Material widgets.