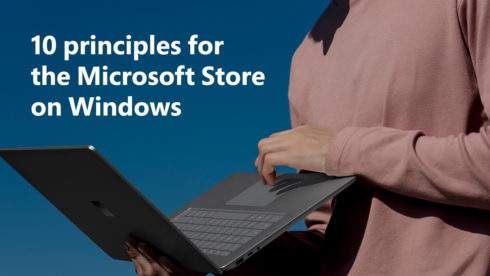 Microsoft released a set of 10 principles to promote fairness and innovation on Windows 10. The release follows the announcement of the Coalition for App Fairness (CAF), which was formed late last month to counter Apple App store practices.

“For software developers, app stores have become a critical gateway to some of the world’s most popular digital platforms. We and others have raised questions and, at times, expressed concerns about app stores on other digital platforms,” Microsoft wrote in the post. “We think the CAF principles, and our implementation of them, can serve as productive examples. Applying these principles to the Microsoft Store on Windows 10 is a first step and we look forward to feedback from developers and the broader community.”

The independent nonprofit Coalition for App Fairness aims to promote competition and to protect innovation on digital platforms by providing a roadmap of acceptable practices for operators of the most popular platforms.

Microsoft emphasized that Windows 10 is an open platform in which developers are free to choose how they distribute their apps, while providing significant benefits to consumers and to developers by ensuring that the apps meet strong privacy, security and safety standards.

Developers who do not choose to use the Microsoft Store will be assured that they will be held to the same objective standard as others and in turn, can be confident that Microsoft will not use its online store to tilt the playing field to its advantage, according to the company’s post.

The Coalition for App Fairness released a statement in support of Microsoft’s App Store principles: “As the first major global platform to commit to meaningful changes for the app ecosystem, the ten principles they have established will provide clarity, promote consumer choice, offer developers an equal opportunity to compete freely, and enable innovation in the years ahead,” the Coalition wrote in its statement. “Creating a consistent standard of conduct across all platforms takes time. Feedback is essential and we applaud the progress Microsoft has made.”

However, when it comes to Microsoft’s online store for its game consoles (in which Microsoft is a major player with its Xbox console), the company acknowledged that it still has more work to do to establish the right set of principles for game consoles, as the ecosystem works differently than that of PCs and phones.

“We think it is important to have a public discussion about how to fairly balance the interests of software developers and platform owners and the best path forward for app stores on our most popular platforms. Apps play an important role in the daily lives of billions of consumers and help to enable the modern digital economy for millions of businesses,” Microsoft added. “But the innovation that drives the app economy also needs healthy and vibrant digital platforms.”