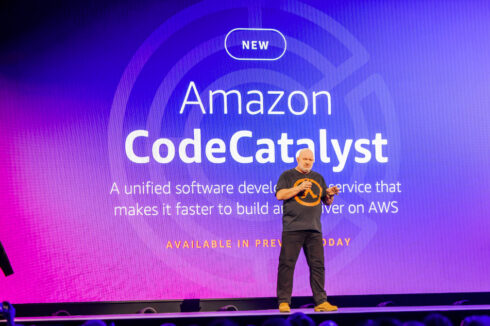 AWS re:Invent is coming to a close today, but the company hasn’t stopped making announcements.

Check here for recaps from the previous days:

Here are the latest updates from the event:

CodeCatalyst is a platform for software developers to plan, develop, collaborate on, build, and deliver applications on AWS.

According to Amazon, the goal of this new platform is to cut down on friction throughout the development life cycle by providing a unified set of tools to do the above.

Key features that will be included in the platform are blueprints to set up project resources, cloud-based development environments, issue management, automated build and release pipelines, dashboards, and unified search.

Step Functions is a visual workflow service for developers, and the new map will extend support for large-scale parallel workloads. The existing map state was limited to 40 parallel iterations, which made it challenging to process workloads with thousands of items.

Now with the distributed map, users will be able to iterate over millions of objects, like logs, images, or .csv files. It can launch up to 10,000 parallel workflows, which is much higher than the concurrency most other AWS services offer, Amazon explained.

The new tool is intended to enable easy creation of serverless applications. It will allow developers to drag and drop AWS services into an application architecture.

It handles the infrastructure as code definitions and provides integration configuration for the services, enabling developers to focus more of their attention on developing.

It is currently in preview, and available for free in a number of AWS regions, such as US East (both Ohio and North Virginia), US West (Oregon), Asia Pacific (Tokyo), Europe (Frankfurt and Ireland).

This new offering will allow developers to create point-to-point integrations between event producers and consumers when building event-driven applications. This removes the need to write glue code.

While the simplest pipe option is just a source and target, there is also an optional filtering step, which will allow you to restrict the events that flow in, and an optional enrichment step to transform events before they reach the target.