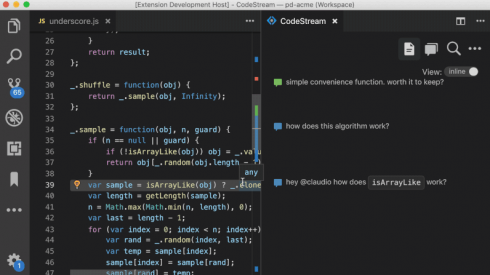 One of the many struggles that development teams face is trying to figure out what other developers were thinking when they wrote a certain piece of code. Codestream is a tool that aims to eliminate that issue and make it easier for developers to collaborate and share knowledge.

Codestream is an interface that sits alongside the code in an IDE, allowing development teams to easily review and comment on code.

The Codestream team just released Codestream v0.50 for Visual Studio and VS Code, introducing significant changes to the interface.

According to the creators, Codestream’s new codemarks view was inspired by the commenting system of Google Docs. Whenever a developer adds a comment or other information (called a codemark), that knowledge is then shared along with the code it pertains to. This means that any developer working alongside that code at a later date can see that information.

The new release also adds the ability to create permalinks of code snippets so that they can be shared outside of the code editor. Permalinks have the option of being public or private, which would require the recipient to log into Codestream to view them.

The Codestream team also added keyboard shortcuts for creating codemarks, which will enable developers to create codemarks without ever having to leave the keyboard.

Documentation continues to be a thorn for developers

CodeStream 7.0 introduces Live View to show what other devs are working on