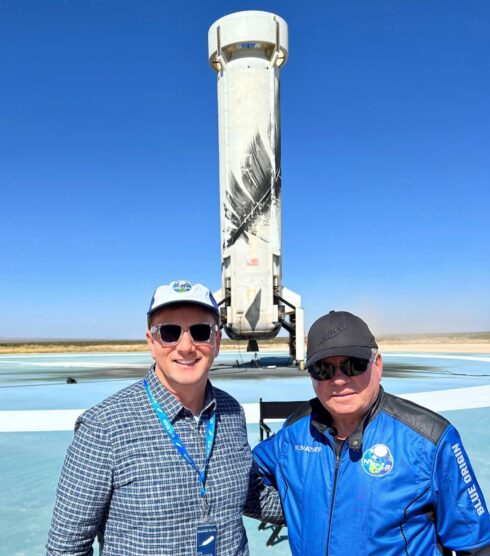 Half a century ago, we as humans made our way to the moon for the first time. For those who were alive at the time, it’s likely a moment deeply ingrained in their memory, and inspired generations of kids to want to grow up and become astronauts.

Another figure who inspired such career aspirations is the fictional Captain James T. Kirk, captain of the USS Enterprise, and last week, the man who originated the iconic “Star Trek” role made his way into space for the first time — becoming the oldest person to travel into space at 90 years old.

With so many of the country’s richest people creating their own competing spaceflight companies, traveling to space is not so much a fantasy only to be achieved by the smartest minds, but a vacation possibility for everyday people in the not-too-distant future.

Blue Origin, the spaceflight company started by Jeff Bezos, made its first mission into space in July, and last week it made another trip into space, carrying Captain Kirk himself, William Shatner.

With him before and after the launch was Don DiCostanzo, CEO and co-founder of electric bike company Pedego, of which Shatner is a sponsor.

DiCostanzo didn’t go up in the rocket himself, but got to witness the whole thing from the friends and family podium that was about a mile away. He compared getting to watch the event with watching John Glenn become the first American to orbit Earth when he was a kid.

“You know ‘one small step for man, one large leap for mankind.’ I think this was that kind of moment. This past week, when William Shatner at 90 years old stepped on … I think he’s done more for space travel than any single person has. Now Jeff Bezos fronted the whole thing and funded the whole thing. But Bill as Captain Kirk, having been into space being the new frontier, and then actually gets to live it.”

He explained that actually the weekend right before they made the trip to the launch site, he attended New York ComicCon with Shatner, so he quite literally went from fantasy to reality.

“He is the most popular star at ComicCon. The lines are longer for his signature and his photo than anybody else at ComicCon, probably by a factor of at least two from my observation. And then he went and did it in reality. He took this fantasy that everyone has of him and he made it reality.”

DiCostanzo added: “A 90-year-old just went up in this space and came back. That’s going to change the world as far as people being inspired for what can happen going to space.”