Report: Containers are growing while serverless computing is misunderstood 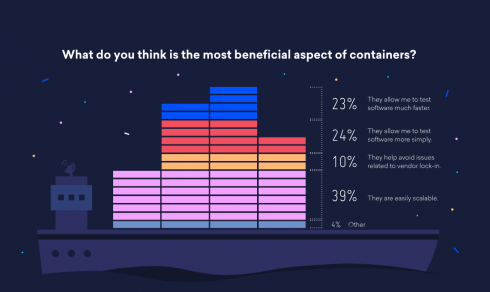 Serverless computing is a misunderstood technology. A recent report from cloud computing company DigitalOcean found half of developers don’t have a clear understanding of what serverless is.

The June 2018 “Currents” report on trends among cloud developers also found rapid acceleration in container adoption; growth opportunities and salary rank as most important among developers in what they want from their jobs; and coding bootcamp participants feel more prepared than college graduates..

This was DigitalOcean’s fourth annual report, which surveyed 5,000 industry professionals around the world.

According to the report, 49 percent of developers reported that they are currently using containers. Though adoption is slightly lower among companies that reported only 1-5 employees at 35 percent, usage is fairly consistent across the industry, the report states. Users reported simplified and faster testing, avoiding vendor lock-in and being able to scale as the top benefits for containers.

Among that same group of companies that reported 1-5 employees, Docker Swarm beats out Kubernetes as the most-used container orchestration platform, DigitalOcean found, but Kubernetes dominates with a 42 percent share. In addition, 52 percent of container users reported they have yet to implement a container management platform, according to the company.

Serverless computing also saw an age-related split among respondents, with the youngest users form the ages 18-24 reporting their biggest challenge is dependence on a third-party provider. The oldest bracket, aged 55-64, reported the complexity of migrating as their biggest concern. But overall, respondents found monitoring and debugging were the number one challenge of serverless deployments.

When looking at jobs, the survey found equal importance placed on a competitive salary and opportunities for internal growth and development for developers looking for a position, with both categories being selected by 39 percent of respondents. A workplace culture in line with developers’ personalities followed closely with 38 percent reporting it a top consideration.

Though voted equally important when looking for a new position, lack of growth and development opportunities placed as the top reason for engineers leaving positions, with salary concerns, poor leadership and outdated technologies following behind.

Finally, this year’s survey took a look at industry-wide feelings about coding bootcamps. Only six percent of respondents reported coming from a coding bootcamp alone, with 51 percent reporting a traditional college background and nine percent reporting both. Surprisingly, the survey found that developers coming out of coding bootcamps are generally more confident in their preparedness for a software engineering position, with 61 percent feeling adequately prepared compared to only 41 percent of college graduates. This in spite of just under half of bootcamp graduates reporting that they’ve felt at a disadvantage because of their background during interviews and only 53 percent of hiring managers worldwide feeling positively about coding bootcamps. When broken down between the U.S., Canada, U.K. and India, India is significantly more receptive towards bootcamps, with 67 percent reporting positive feelings towards them.