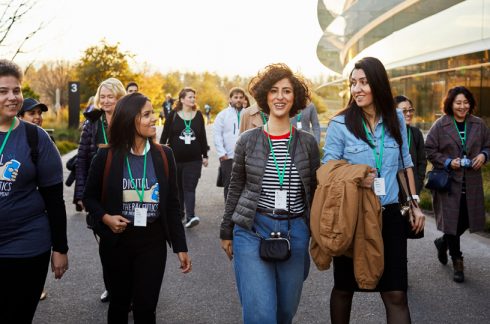 Apple has announced its highest developer earnings ever. According to the company, developers have earned $120 billion since the app store launched in 2008. Over a quarter of that has been earned just in the past year, Apple explained.

“In the past, starting a small business often meant having to invest in overhead, inventory or retail space. Today, a world of opportunity opens up with some coding skills and an entrepreneurial spirit,” said Esther Hare, Apple’s senior director for worldwide developer marketing and executive sponsor of Women@Apple. “The App Store is the new digital Main Street, and creative developers are tapping into the vast potential of the global app economy. We hope that this program helps to inspire women around the world to learn to code, join the iOS development community and share in the thriving app economy.”

The company has also announced a Data Science Apprenticeship program for its employees. The 24-month program is targeted towards candidates without college degrees and is composed of three main components: education, mentorship, and practical experience.

“The moves we’re making on data science skills training and certification is the right thing to do for IBM, for the burgeoning data scientist discipline and for business, at large. These efforts will not only fuel a new generation of data scientist, but provide a meaningful credential to employers for searching and hiring them. They will help take the mystery out of the recruiting process, and further elevate the field of data science, bringing clarity and confidence to organizations along the way,” IBM wrote in a post.

“Traditional completions help you type a single ‘word’ of code at a time. Today, we’re releasing AI models that in some contexts can predict the next several code elements you’re most likely to type. At times this can mean even full lines of code,” the Kite team wrote in a post.

Julia 1.1 now available
Julia 1.1 has been officially released. Julia is a high-level programming language for scientific and numerical computation.

New features include an exception stack on each task, that the macro Base.@locals returns a dictionary of current local variable names and values, and that binary ~ can now be written as a dot.