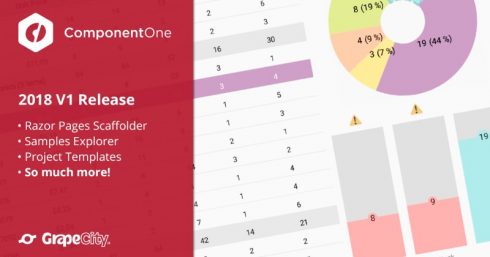 ComponentOne Studio Enterprise is a .NET solution for business applications. The latest release will feature an updated multi select input control that adds checkboxes so users can select more than one option. It will have new project templates in WinForms, WPF, and ASP.NET MVC, as well as new charts and features in FlexChart including Pareto, Gantt, and Point and Figure. In addition, users will now be able to execute samples and demos right from their desktop.

ComponentOne Studio for Xamarin features IU controls for native mobile apps. The latest release will include a new Dashboard Demo with FlexChart, FlexPie, FlexGrid, BulletGraph, and CollectionView. The new demos are designed show how to use the controls within complex multi-page arrangements, such as master detail, carousel, and tabbed pages.

FlexChart now also includes features such as pan and zoom, scale, DisplayedRange, and ScrollTo. FlexGrid now has column and row dragging and reordering, additional animations, and edited deletions. In addition, the release adds more animations to FlexChart and FlexPie.

As part of the Wijmo release, GrapeCity is releasing a new licensing structure that will enable subscribers to have a perpetual developer license and unlimited domains. Wijmo is designed to provide next generation JavaScript controls. Other updates to the solution include availability on NPM; a new TabPanel control that has auto-refresh, embedded controls, and is not dependent on Bootstrap dependencies; and direct connection of Wijmo OLAP to Microsoft SSAS Cubes.

“This release showcases the future of ComponentOne and Wijmo,” said Jody Handley, product marketing manager at GrapeCity. “We’re laser-focused on better customer experiences across our component lines. With so many available project templates, .NET customers can jump-start a wide variety of projects in Visual Studio, and Wijmo’s NPM deployment puts the tools directly where the developers most want to access them: right in the command prompt.”