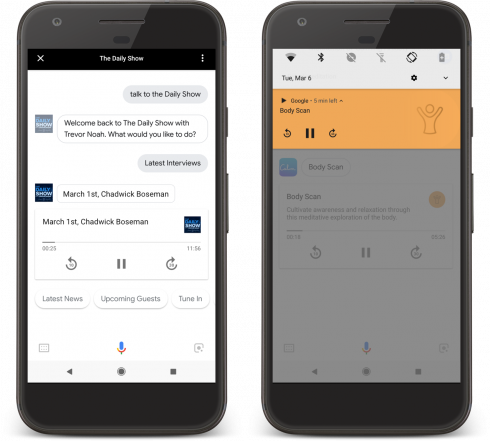 Users will now have access to daily updates and push notifications, which were in developer preview for the past few months. Developers will now be able to access digital purchases made by users from the Android app, allowing them to determine whether or not they’re interacting with a user who has paid for a premium experience within an app. In addition, the company has added Custom Device Actions which will allow developers to specify any grammar or command to be executed by the device.

Microsoft develops new VR controllers for haptic feedback
Microsoft says it is making progress toward delivering a more complete virtual reality experience. The Microsoft Research team has developed a few new haptic controllers to provide users with the feeling of touching virtual objects. The CLAW controller uses a motorized arm to rotate the user’s index finger relative to the palm to simulate feedback.

Another controller prototype is the Haptic Wheel, which uses an actuated wheel moving up and down to render contact and spins to render forces and motion as the user slides along a virtual surface. Haptic Links uses multiple connectors to simulate stiffness between two handheld VR controllers. The Canetroller provides three different types of feedback, making it ideal for applications for users that have low vision or are blind.

“What you really want is the impression of virtual shapes when you interact with objects in VR, not just the binary feedback you get from current devices,” said Christian Holz of the Microsoft Research team. “Our controllers render such shapes, giving your fingers and hands continuous and dynamic haptic feedback while you interact.”

Ben Golub joins Storj Labs as Executive Chairman and interim CEO
Co-foudner of Docker Ben Golub has joined Storj Labs as executive chairman and interim CEO. Storj Labs is a decentralized cloud storage provider, working with individuals and organizations that rent excess hard drive capacity to provide storage rather than having its own data center. Currently, the startup provides secure storage for over 60 petabytes of data on a network comprised of 150,000 decentralized storage nodes. As executive chairman,Golub’s top priorities will be setting the foundations for long term business, delivering excellence to customers, and creating value for the community.