When last we left IBM’s Watson, the cognitive computing platform was basking in the glow of its victory on the television quiz show “Jeopardy.” Showing off its mastery of trivia, Watson smoked the field of human contestants back in 2011.

Since then, IBM has been building an ecosystem around Watson, working with entrepreneurs to develop more practical applications for the technology. IBM launched Watson as a business unit in January 2014, and since that time it has begun to expose the technology in three ways, according to Lauri Saft, vice president of the Watson ecosystem and partner programs.

First, she said, is to “take the big hairy problems in the world and apply innovation and assets to create transformations.”

Second is to allow the public to license Watson for its own purposes, or to be implemented internally within an organization.

Third, by exposing APIs to entrepreneurs and innovators, Saft said IBM is “letting the world have at it and see what comes out of it.” When this program was first announced, she said IBM quickly had more than 700 use cases for the technology. Today, there are more than 6,000, from education to civil engineering to healthcare to toy manufacturing.

Saft said there are currently 26 APIs for Watson, from the basic question-and-answer functionality to natural language processes to the more complex Personality Insights API, which enables an organization to create a 52-point profile of an individual based on that person’s writings and tweets found on the Internet.

“These insights are valuable to retail, healthcare” and many other fields, she said. “For instance, it could help to align a person with the right [medical] practitioners, or to be used by schools to mix students in classrooms to gain diversity.”

The Personality Insights API, Saft explained further, helps organizations move from collecting mere demographic information (I’m a 30-year-old white male from New York) to learning about the individual (I’m a voracious reader, upbeat and love the outdoors). This, she said, helps organizations feed people with information, products and more that are unique to them. Cognitive computing—the ability for machines to learn about us—“is playing a more important part in our lives,” she said.

Working to make it happen
How do organizations take advantage of the Watson technology? IBM has set up a US$100 million fund with which it can capitalize early-stage companies looking to build solutions on top of Watson. IBM also helps its customers with design and ideation up front, and then puts that that into an interaction layer to create something unique.

Even before the launch of the Watson business unit, IBM has been working behind the scenes in healthcare. Saft explained that research and product development were comingled, so that “if R&D comes up with something to solve a customer’s problem, we grab it off the line and throw it into a product.” This helps gets innovative work into the hands of customers much more quickly, she said.

Jeff Cohen, cofounder and vice president of product strategy at health optimization platform provider Welltok, said he partnered with IBM more than a year and a half ago as part of the Watson ecosystem partner program. “We use cognitive computing to drive very personal engagement with the platform,” he said. “We’ve created a Concierge app that’s tied to our core CaféWell platform. It allows customers to dialog in natural language and is available 24×7. You can ask questions and receive responses and recommendations regarding health topics,” such as preventative wellness, physical activity and healthy dining.

Before cognitive platforms existed, employees often had only a link to the company health plan document, which Cohen described as “an incredibly difficult document to navigate.”

But with the Concierge app, users can ask questions about their health benefits and get real-time responses relevant to their personal situation. “People can ask, ‘If I’m having a baby, how long can I stay in the hospital and how much will it cost me?’ They’ll get a real-time response, saying ‘Your current plan for birth allows a stay of three days and costs $1,200,’ ” Cohen said.

As the user asks more questions, the Watson-based app learns his or her phrasing and natural language nuances, which helps it get smarter and build a vocabulary within Watson that the user can understand. “The introduction of natural language and dialog services is a game-changer,” Cohen said. “It changes the dynamic of consumerism in healthcare. You can now get information easily, quickly and extremely accurate.”

Cohen said that to execute on the company’s vision, “We needed to personalize the experience and make intelligent recommendations. This involves structured and unstructured content not written for the average consumer.

“If companies don’t have a strategy to leverage…[cognitive computing and machine learning], you’ll be behind the competition.”

A talking dinosaur
One of the core strengths of Watson is its ability to store information and answer questions from that information. JP Benini and his team at New York City-based Elemental Path thought about applying that to children’s toys—specifically, the Cognitoys Dino. 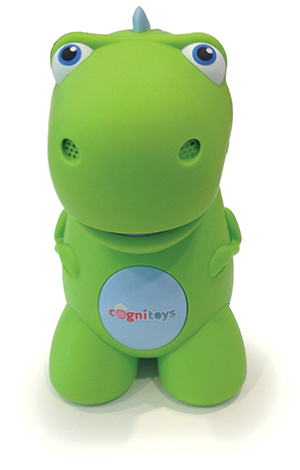 “Kids ask a lot of questions, and we wanted to make it fun,” Benini said. “Studies show that kids ask about a hundred questions a day, and parents usually give out around 23 [answers]. So we looked at the tough questions kids ask… ‘Why don’t fish get electrocuted when lightning hits the ocean?’ ‘Where do you go when you die?’ Then we wanted to see how real we could make this toy. We gave it a personality and scaffolded educational exercises around the kids. If they like soccer, then let’s count soccer balls. But we’ve created a full-fledged dialog engine that can learn from and grow with the child.”

Benini explained that his company hired someone who had written for the “Sesame Street” children’s television program who is experienced in making education fun and engaging. “Kids love talking to a dinosaur. It has a synthesized voice; nothing is pre-recorded. It’s doing it all in real-time,” he said.

The toy uses Watson for contextual and semantic search of the content, which Benini said is child-friendly, to deliver a curated experience. Watson uses its natural-language processing capabilities to derive information from the limited speech of a child, so the toy can either simply read a story to a child with limited speech and vocabulary, or it can work with a more precocious child to create a unique story.

The toy, which comes in three colors, has gone from proof of concept to first iteration, and is shipping in November—in time for the holidays.