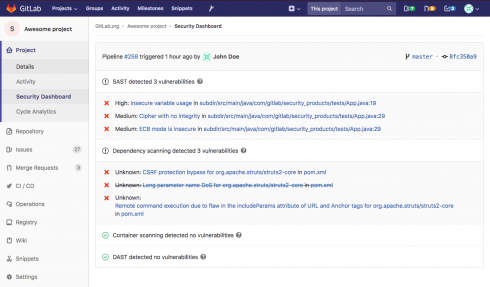 “Implementing Drone into a deployment workflow allows enterprises to have significant advantage bringing applications to market quickly, as well as reducing costs along the way,” Drone wrote in a post.

GitLab 11.1 is now available
GitLab has announced the release of version 11.1. This latest release includes increased security visibility with new dashboards and views that provide contextual information. It also features better code search and UX improvements, among other new features.

They recommend installing the Android 8.0 Oreo SDK, updating the game to target API level 26, and determining whether the game has any incompatibilities or issues. A more detailed set of instructions can be found here.

“Every new Android version introduces changes that bring significant security and performance improvements – and enhance the user experience of Android overall. Updating your games to target the latest API level ensures that your users can benefit from these improvements, while still allowing your games to run on older Android versions,” the Android team wrote in a post.

ReactOS 0.4.9
ReactOS 0.4.9 has been released. It re-implements the ability to self-host, which used to be possible before the kernel was reworked into a more NT-compliant implementation that resulted in some gaps in functionality.

It also made some improvements to stability and to the shell, such as new extensions and the ability to choose whether to move, copy, or link a file when dragging it with the right mouse button.