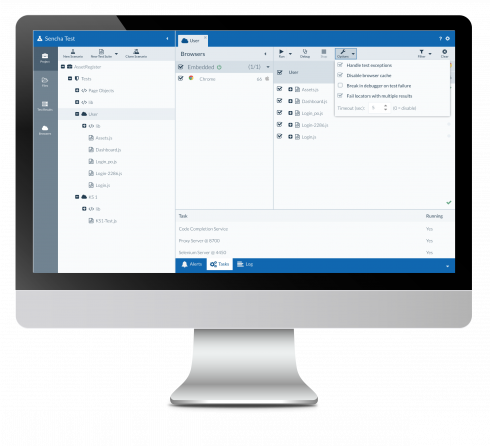 Sencha announced the latest version of its cross-platform testing tool, Sencha Test 2.2. Sencha Test features more than 200 enhancements and bug fixes, making it easier to create tests, manage defects and store results, according to the company.

“We’re excited to announce the release of Sencha Test 2.2 GA, and this release is in line with our renewed commitment to stability and supportability across all of Sencha’s products,” said Robert Warmack, director at Sencha. “We’ve been working closely with several of our larger customers to polish the product with various improvements and tweaks to usability and the testing workflow.”

Microsoft has announced the latest version of its typed superset of JavaScript programming language. The release adds a number of improvements to the editor including: unused span reporting, ability to convert property to getter/setter and the ability to rename a file and move declaration to a new file.

The core language and compiler have also been updated with import () types, –pretty by default, support for well-typed JSON imports, type arguments for tagged templates strings, and support for symbols and numeric literals in keyof and mapped object types.

Full details can be found here.

ASF gets new support from Oath

The Apache Software Foundation has announced expanded support from its long-term platinum sponsor Oath. Oath is a subsidiary of Verizon. With the new expanded support, Oath will work to help boost the efforts of the ASF by donating colocation space, machines and onsite technical support. This will be part of the ASF’s recently announced targeted sponsors who contribute to specific activities or programs.

“ASF Sponsors such as Oath help us run our day-to-day operations,” said Phil Steitz, ASF chairman. “Targeted Sponsorships allows us the ability to provide support in additional areas of need. Each day, more than 300 Apache projects and their communities rely on build services that are maintained by the ASF Infrastructure Team. The generosity provided by Oath helps us expand our infrastructure services beyond continuous integration and testing, to enable automated website generation and more. Their efforts, in turn, help our community at-large, and benefit the billions of Apache users around the world.”

FundRequest’s blockchain marketplace is designed to reward developers for their open source contributions. The platform integrates directly with GitHub, enables projects to fund issues, and allows developers to solve those issues and be rewarded in cryptocurrency.

“Developers can start earning experience in blockchain development and are now able to participate directly in projects they care about by solving issues through FundRequest,” said Karel Striegel, co founder and CEO of FundRequest. “Meanwhile, projects and companies can tap into a pool of passionate open source and blockchain developers through our platform. We look forward to being the bridge for these two groups and accelerating the development of open source and blockchain technologies.”