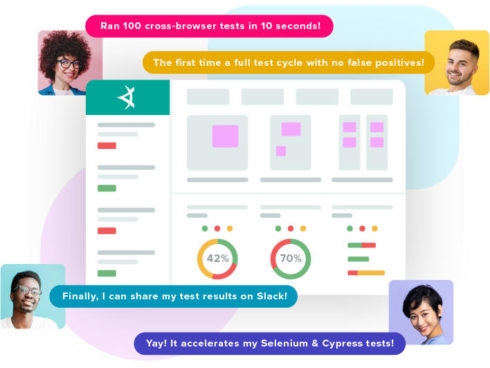 “Application changes occur several times a day now. These changes need to work on many browsers, devices, operating systems and different environments, so you need to do far more work in far less time,” said Gil Sever, CEO and co-founder of Applitools. “You can’t manually write and maintain all the scripts needed, so you need Visual AI to take over these rote aspects of the work.”

A recent survey of 400 of Fortune 1,000 companies reveals that those organizations use an average of 30 different applications that include 94 pages which need to display correctly on six to 10 different screen sizes in six to eight different human languages.

Importantly, Applitools integrates with existing tools in a team’s DevOps tool chain, ensuring app quality throughout the SDLC. Examples include CI and CD servers, test automation platforms, deployment tools, monitoring tools and repositories. That way, when code is pushed to the repository, it can be tested and automatically deployed if it passes.

“Traditionally, you’d use Selenium or Appium test automation scripts to mimic a human interaction with the UI. Then, the results would be compared to the expected results to make sure everything is appearing in the right place,” said Sever. “This is what we automate with Visual AI so instead of writing hundreds of lines of code to assert and validate that everything works, you can use Applitools to test all the screen interactions and visually compare them to the results with the baseline.”

Applitools automatically surfaces UI issues and their root cause so they can be resolved faster. Specifically, it provides side-by-side screenshots showing the expected result and the actual result so testers don’t have to recreate the errors themselves. The baseline comparisons can be a previous version compared to the new version, such as what a page looks like on one browser or device versus another. It also reveals how a page appears given different screen resolutions.

“We use automatic maintenance which saves a lot of time. It also keeps the [test] coverage high,” said Sever. “When you’re manually maintaining and fixing thousands of scripts, test coverage drops.”

Applitools boasts nearly 100 of the Fortune Global 500 as customers including Amazon, Salesforce, Capital One, McKesson, and Sony. Four of the top seven pharmaceutical giants use Applitools to ensure that drug warnings render properly irrespective of devices and also use Applitools UI version control results as evidence of regulatory compliance. Other Applitools customers include nine of the 10 largest software companies and half of the largest U.S. banks.

As more software development and testing frameworks emerge, Applitools supports them via APIs so customers can connect to them quickly and easily. Applitools also supports content management systems (CMSs) such as Adobe Experience Manager so data can flow seamlessly from the CMS to an app.  Applitools users simply write the navigation script and the validation or assertion in the Applitools’ chat window.